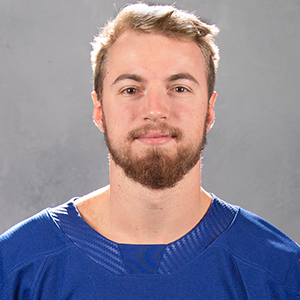 2021-22: Appeared in 19 games during his first season with the Rochester Americans (AHL), posting one goal, three assists for four points ... Ranked second among all Amerk rookies with two goals and finished third among all first-year players with six points in 10 Calder Cup Playoff contests during the Amerks’ run to the North Division Finals ... Tallied two assists for his first multi-point game of the season in the series-clinching win at Utica on 5/19 ... Netted his first playoff goal in his AHL postseason debut in Game 1 of the first-round series against Belleville on 5/04 ... Scored his first AHL goal – and first as an Amerk – against Cleveland on 4/23 ... Notched his first point as an Amerk with an assist at Cleveland on 4/01 ... Made his Amerks/AHL debut against Cleveland after missing the first 57 games of the season recovering from a knee injury

2018-19: Contributed four goals and five assists for nine points in 34 contests with Sparta ... Produced five points (2+3) in four playoff games with the club

INTERNATIONAL: Has represented the Czech Republic at the 2019, 2020 and 2021 IIHF World Championships