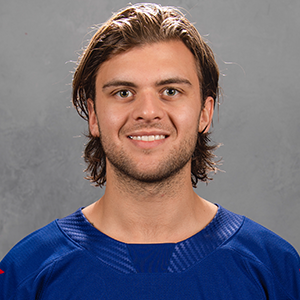 2021-22: Played an NHL career-high 36 games for the Los Angeles Kings and Montreal Canadiens, tallying 10 points (2+8) ... Recorded four assists in five games with the Ontario Reign (AHL) ... Scored his first two NHL goals with Montreal ... Notched an NHL career-high three points on one goal and two assists at New Jersey on 4/07 ... Began the season with a three-game point streak from 10/30 to 11/03

2019-20: Plotted 25 points on eight goals and 17 assists in 49 games with Ontario prior to the COVID-19 Pandemic ... Appeared in four games with the Kings during a brief- NHL stint ... Finished the shortened season second among all Reign defensemen in goals, assists and points ... Was named to the AHL All-Star Classic roster, which was held in Ontario

2018-19: Led all Reign rookie defensemen in both assists (22) and points (29) while tying for first with seven goals in 52 games ... Registered his first multi-point effort on one goal and two assists against Stockton on 10/12 ... Earned an assist on 10/05 in his professional debut versus San Jose

2017-18: Completed a five-year junior career in the Western Hockey League (WHL) between the Brandon Wheat Kings and Moose Jaw Warriors, registering 167 points on 26 goals and 141 assists in 195 career games ... Topped all WHL defensemen with 60 assists in 54 games with Brandon and Moose Jaw while his 71 points tied for third during his final season ... Began the campaign totaling 47 points (10+37) in 28 games with Brandon before being traded to Moose Jaw, where he collected 24 points (1+23) in the final 26 games of the season ... Finished fourth among all blueliners with 13 assists and seventh in points (14) in 14 postseason contests with the Warriors

2016-17: In 48 games with Brandon, paced all Wheat Kings blueliners in both points (40) and assists (35) ... His assists ranked second overall and points were seventh-best on the team ... Recorded one goal and three assists for four points in four playoff games, all of which led Wheat King defensemen ... Was named to WHL Eastern Conference First Team All-Star

2015-16: Ended the season third among all Wheat Kings defensemen with 43 points on six goals and 37 assists appearing in a career-high 71 games with Brandon ... Tied for second among WHL defensemen in scoring with 14 points (6+9) in 21 playoff games while helping the Wheat Kings claim the WHL Championship

2013-14: Began the season with the Wheat Kings appearing in two games before skating in three playoff contests ... Produced one assist in his lone tilt with the Lloydminster Bobcats (AJHL)

Helped Team Canada claim a Gold Medal in 2015 and 2018 as he scored once goal in four games and had two assists in six games, respectively ... Collected six assists in seven contests to earn a silver medal at the 2017 World Junior Championship