Bring out your group of 10 or more people to a Rochester Americans game and receive discounted pricing and exclusive benefits! From company outings, to youth hockey programs, to school groups, fundraisers, and much more, the Amerks will make your night one to remember! 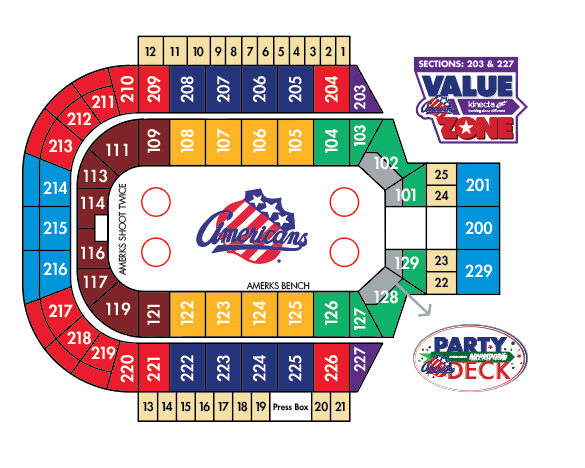 PREGAME ICE - Our pregame ice package offers an hour and a half of ice time prior to our games. During the time, you can use the ice for a range of activities, including energetic team practices, exciting and fun open skates, head to head scrimmages, and even league games!

BENCH WARMERS - Sit on the Amerks’ bench during game warm-ups, letting you see the action up close!

TUNNEL TEAM - As you stand out on the ice, the Amerks’ players will make their entrance, skating so close you could almost touch them! Also, you get to stand tall with our Amerks during the performance of the National Anthem!

HONDA SHOOTOUT - With the Honda Shootout packages, you will be able to show off your puck-handling skills in the second intermission. You can also compete against other teams in a head to head shootout!

INTERMISSION SKATE/PERFORMANCE - Your group can enjoy the fun of a free skate, the head to head competition of a scrimmage in front of a packed arena, or even the heart pounding performance of figure skating!

NATIONAL ANTHEM PERFORMANCE - Bring your group out to showcase your talents and patriotism by performing the National Anthem prior to and Amerks game!