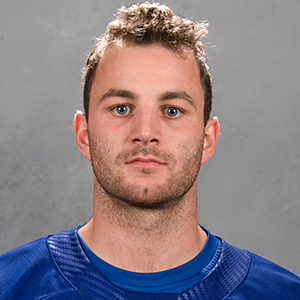 2021-22: Spent much of the campaign with the Milwaukee Admirals (AHL), posting six goals, 25 assists for 31 games while also adding six helpers in nine postseason contests ... Additionally, tallied two assists with the Nashville Predators (NHL) ... Closed out the slate by recording four goals, eight assists for 12 points over the final 10 games of the regular season, which was highlighted by a career-high four assist outing at Manitoba on 2/23

2020-21: Split the campaign between Nashville and the Chicago Wolves (AHL) as he combined to skate in 25 games and produced 10 assists ... Earned an assist in seven of the nine contests with Chicago, all with February ... Made his NHL debut on 3/09 at Carolina then recorded his first NHL point on an assist versus Chicago on 4/03

2019-20: In his first professional campaign, he logged 28 points on four goals and 24 assists in a personal-best 62 games with the Admirals ... Prior to the COVID-19 Pandemic, he ranked second among all first-year Milwaukee skaters with 24 assists while his 28 points were third-most ... Additionally, he finished sixth in the AHL among all rookies in points and tied for sixth in assists ... Scored his first professional goal on 10/20 at Chicago ... After making his pro debut on 10/06 versus Iowa, he recorded his first point on an assist against Grand Rapids five days later

2018-19: Finished a three-year collegiate career at Northeastern University (H-East), producing 94 points on 22 goals and 72 assists in 111 career games ... In his third season, he registered a career-high 36 points on eight goals and 28 assists in 37 games with the Huskies ... Finished with a career-high blocked shots (58) and had a career-high in shots (114) while helping Northeastern win back-to-back Beanpot Championships ... Named NCAA (East) Second All-American team and was a finalist for the Hobey Baker Memorial Award ... Served as alternate captain

2017-18: Dressed in 36 games and was fourth on the team and tied for fifth in the nation in scoring among defensemen with 35 points on six goal and 29 assists ... Earned an assist on three of the Huskies' goals against Boston University to lead the team to their first Beanpot championship since 1988 on 2/12 ... Named NCAA (East) All-American and NCAA Hockey East First All-Star teams

2016-17: Played in all 38 games at Northeastern and was ninth in both defensemen scoring and rookie scoring in Hockey East with 23 points ... Had a career-high four points (1+3) at UMass on 1/31 ... Recorded his first collegiate points with a power-play goal and an assist against Arizona State on 10/22 ... Made his collegiate career on 10/07 at Quinnipiac

2015-16: Completed a two-year junior career between the Bloomington Thunder and Waterloo Black Hawks ... In two seasons with Bloomington, recorded 69 points (16+53) in 103 career games, becoming the all-time scoring defenseman ... Led all USHL defensemen in scoring with 13 goals and 36 assists in 60 games ... Recorded six assists in eight postseason contests in Bloomington’s first-ever playoff spot ... Topped the league with 24 assists on the power play, and was second overall in power play scoring ... Was tied for fourth among defensemen with three game-winning goals, and was one of four skaters to play in every game for Bloomington ... Was Bloomington’s first-ever All-USHL selection