VAL JAMES, JASON POMINVILLE TO JOIN AMERKS HALL OF FAME AS CLASS OF 2023

The Rochester Americans are pleased to announce today that the team will induct forwards Val James and Jason Pominville into the Amerks Hall of Fame as the Class of 2023. Unanimously selected for induction by the Amerks Hall of Fame Committee, James and Pominville will take their rightful place in the prestigious club during a pregame ceremony on Friday, Jan. 27 when Rochester hosts the Charlotte Checkers at 7:05 p.m. at The Blue Cross Arena.

Hall of Fame Night is presented by UR Medicine Orthopaedics & Physical Performance. 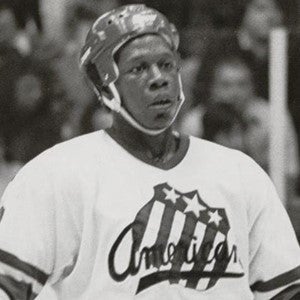 James, the first American-born black player in Amerks and NHL history, appeared in 253 games with the Amerks from 1980-81 to 1984-85 and was a fan favorite over his five seasons with the club.

“This is an incredible honor as I spent some amazing years with the Amerks,” said James. “The Amerks organization is top notch, and the fans were always there for me. I have nothing but great memories of my teammates and coaches and am forever grateful for my time in Rochester.”

After a brief three-game stint with the Amerks in 1980-81, James would remain in Rochester for the next four seasons, leading the team to a playoff appearance each year and culminating with a Calder Cup championship in 1983. His biggest on-ice contribution came that year when he scored the game-winning goal in the deciding game of the Calder Cup Finals against the Maine Mariners, earning Rochester its first of two Calder Cups in a four-year span during the 1980s.

Originally a 16th-round pick (184th overall) of the Detroit Red Wings in the 1977 NHL Amateur Draft, James collected 24 points (10+14) and 496 penalty minutes during his Amerks career.

It was also during his time with the Amerks that James made a substantial impact on the game of hockey, becoming the first African American player in the NHL when he took to the ice with the Buffalo Sabres in 1982. In 1987, he once again made history as the first black player of any nationality to skate for the Toronto Maple Leafs. While popular for his tough play and winning personality, James faced racist taunts at opposing arenas throughout his career.

A native of Ocala, Florida, James retired following the 1987-88 season after additional stops in St. Catharines, Newmarket and Baltimore, concluding an eight-year professional playing career with 34 points (14+20) in 416 games at the AHL level as well as 11 career NHL games with Buffalo and Toronto.

In 2015, James authored an autobiography entitled Black Ice: The Val James Story. Co-written with John Gallagher, the book chronicles the life and story of the trail-blazing athlete who endured and overcame discrimination to realize his dreams and become an inspiration for future generations. 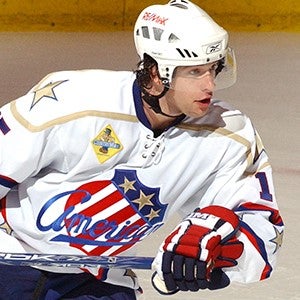 Set to become the 67th member of the exclusive club, Pominville spent his entire American Hockey League career with the Amerks from 2002-06 after being selected by the Buffalo Sabres in the second round (55th overall) of the 2001 NHL Draft. In 235 career games, he amassed 192 points on 96 goals and 96 assists while also adding 21 points (10+11) in 19 playoff appearances with Rochester.

“I’m extremely honored and humbled to join so many other Amerks greats in the Hall of Fame,” said Pominville. “Rochester will always be the best place to play in the American Hockey League and my time there definitely helped me take the next step in my career and fulfill my lifelong dream of playing in the National Hockey League. My family and I look forward to seeing all the great fans and everyone who supported me along the way on Jan. 27.”

After posting 34 points in 73 games as a rookie in 2002-03, Pominville nearly doubled his offensive output the following year with an astounding 64 points in 66 games to finish second on the team in scoring. He also made his NHL debut that year, appearing in one game with the Sabres before going on to pace the Amerks with nine goals and tie for the team’s scoring lead with 19 points during Rochester’s impressive run to the Western Conference Finals.

Pominville duplicated the effort in 2004-05, again tying for second on the team in scoring while also becoming the first Amerk to record back-to-back 30-goal seasons since Peter Ciavaglia in 1991-92 and 1992-93.

His biggest impact offensively came at the beginning of the 2005-06 season when he opened the campaign with 19 goals and 26 points in only 18 games. Pominville scored at least one goal in 10 games over that span, including a five-goal effort in an 8-4 home win over the Cleveland Barons on Oct. 21. He became just the third player in franchise history to score five goals in a game, joining Donald Audette and Dave Hynes.

The impressive start earned him a permanent promotion to the NHL, where he closed out the year with 30 points – including 18 more goals – in 57 games with Buffalo. After scoring his first NHL goal on Nov. 27, he would go on to score perhaps the biggest goal of his NHL career in Game 5 of the 2006 Eastern Conference Semifinals against the Ottawa Senators, marking the first time in NHL history that a playoff series was decided by an overtime shorthanded goal. The Sabres would advance to meet the Carolina Hurricanes in the Eastern Conference Finals after failing to qualify for the playoffs the previous three seasons.

A native of Repentigny, Quebec, Pominville played an integral role during Buffalo’s record-setting season in 2006-07, his first full season at the NHL level, matching a career-high with 34 goals while appearing in all 82 games. He helped the Sabres set franchise records for the most consecutive wins and road wins to begin a season while also leading Buffalo to the 50-win mark for just the second time in franchise history. The Sabres also tied the franchise mark for the most points in a season on their way to capturing their first President’s Trophy as regular season champions and advancing to the Eastern Conference Finals for the second straight year.

Pominville’s first stint with Buffalo was highlighted by four straight 82-game seasons coinciding with a two-year term as Sabres team captain from 2011 to 2013. After parts of five seasons with the Minnesota Wild from 2012 to 2017, during which the Wild qualified for the postseason each year, Pominville returned to Buffalo for his final two seasons, including another 82-game campaign in 2017-18.