The Rochester Americans are treating fans to a full weekend of Calder Cup Playoff hockey and family-friendly entertainment as the Amerks continue their second-round series against the Utica Comets with Games 2 and 3 of the North Division Semifinals scheduled for Saturday, May 14 and Sunday, May 15. 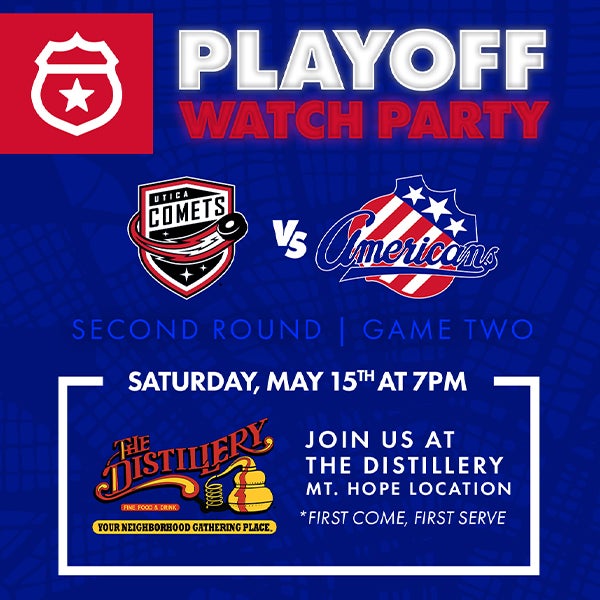 For the second straight week, the Amerks are hosting a Watch Party for Game 2 against the Comets in partnership with The Distillery, a longtime sponsor of the Amerks, at the restaurant’s Mt. Hope Ave location on Saturday, May 14 at 7:00 p.m.

The matchup from Adirondack Bank Center in Utica will be livestreamed on AHLTV, featuring the call of Amerks Hall of Fame broadcaster Don Stevens, who’s currently in his remarkable 36th season as the legendary “Voice of the Amerks.”

The Distillery will again offer its entire menu, including their famous haddock fish fry, draft specials and 2-for-1 frozen margaritas and mimosas throughout the event, while fans will have the opportunity to win various Amerks prizes and other giveaways.

The Distillery is located at 1142 Mt. Hope Avenue in Rochester. 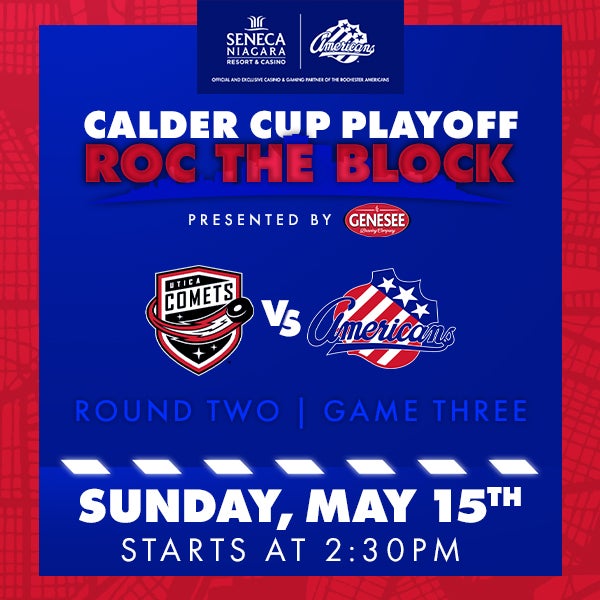 The weekend festivities carryover into Sunday, May 15 when the series shifts to Rochester for Game 3 at 5:05 p.m. at The Blue Cross Arena. Fans are invited to join the Amerks for The Genesee Pregame ROC the Block Party beginning at 2:30 p.m. on Broad St.

The event will feature live music, food and drink specials, including an assortment of $5 Genny draft products, $5 Labatt Blue and Labatt Blue Light and $6 seltzers for fans 21 and older, appearances by various Amerks alumni members, giveaways and inflatables for the kids.

To accommodate the event, Broad St. will be closed and inaccessible from Exchange Blvd. and South Ave. Fans are encouraged to arrive early to allow enough time to navigate through the congested streets surrounding Blue Cross Arena while parking is also expected to fill up fast.

The first 5,000 fans in attendance for Game 3 will receive a set of thundersticks.

Amerks Calder Cup Playoff tickets are available for purchase either in person at The Blue Cross Arena Box Office, online at www.amerks.com/playoffs or by calling 585-454-5335.