The Genesee Brew House, a longtime supporter and partner of the Rochester Americans, has unveiled a new Amerks Amber Ale in celebration of the Amerks’ 65th season in the American Hockey League.

The Genesee Brew House will debut its new beer collaboration on Friday, April 23 when the Amerks host the Utica Comets at The Blue Cross Arena. The special-release brew will be available for purchase on draft and in to-go growlers and crowlers exclusively at the Genesee Brew House.

A super smooth amber ale with subtle malty notes that are accented by biscuit and toasted caramel flavors, Amerks Amber Ale was created and crafted by Jones using his 20-barrel pilot system. 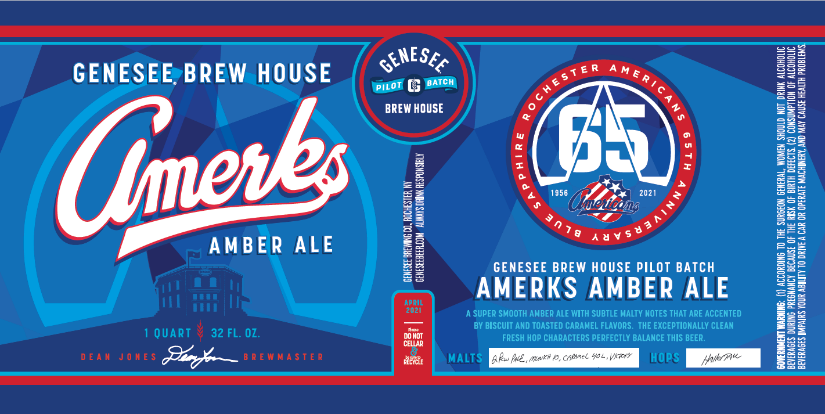 “The Amerks and Genny beer are two of the most iconic and time-honored institutions here in the city of Rochester and we’re excited for the chance to bring those together with the launch of the new Amerks Amber Ale in honor of our 65th season,” said Amerks Vice President of Business Operations, Rob Minter.

In addition to the new beer, the Genesee Brew House is offering a new promotion to celebrate the Amerks’ historic 65th season in Rochester. Now through the end of the month, anyone who purchases a 30-pack or two 12-packs of any Genesee beer and brings the receipt to the Brew House will receive a limited-edition Amerks 65th Anniversary t-shirt, while supplies last.