The Rochester Americans (5-4) return home looking to stave off elimination in a must-win Game 3 of the North Division Finals against the Laval Rocket (5-2) tonight at The Blue Cross Arena. The Rocket currently lead the best-of-five series 2-0 following a pair of home wins Sunday and Monday night in Laval. Game time is slated for a 7:05 p.m. start.

HOW THE SERIES SHAPES UP

The Amerks come into Game 3 on the brink of elimination and in pursuit of their first of three straight wins in order to avoid a third-round departure at the hands of the Rocket. Rochester dropped the first two games of the series in Laval, being outscored 9-2 at Place Bell.

Following a first-round bye, Laval outlasted Syracuse in the North Division Semifinals, winning their first-ever playoff series 3-2 in overtime in Game 5 on Wednesday. After alternating wins with the Crunch through the first four games of the series, the Rocket were 31 seconds away elimination until former Crunch forward Cedric Paquette evened the game in the final minute to force overtime before Gabriel Bourque sealed the comeback midway through the extra session with the series-clinching goal for Laval.

Laval forward Danick Martel led the Rocket with a franchise-record four-goal performance in the series opener, becoming the first AHL skater to net four goals in a Calder Cup playoff game since Greg Scott of the Toronto Marlies did so against the Amerks back on April 27, 2013. 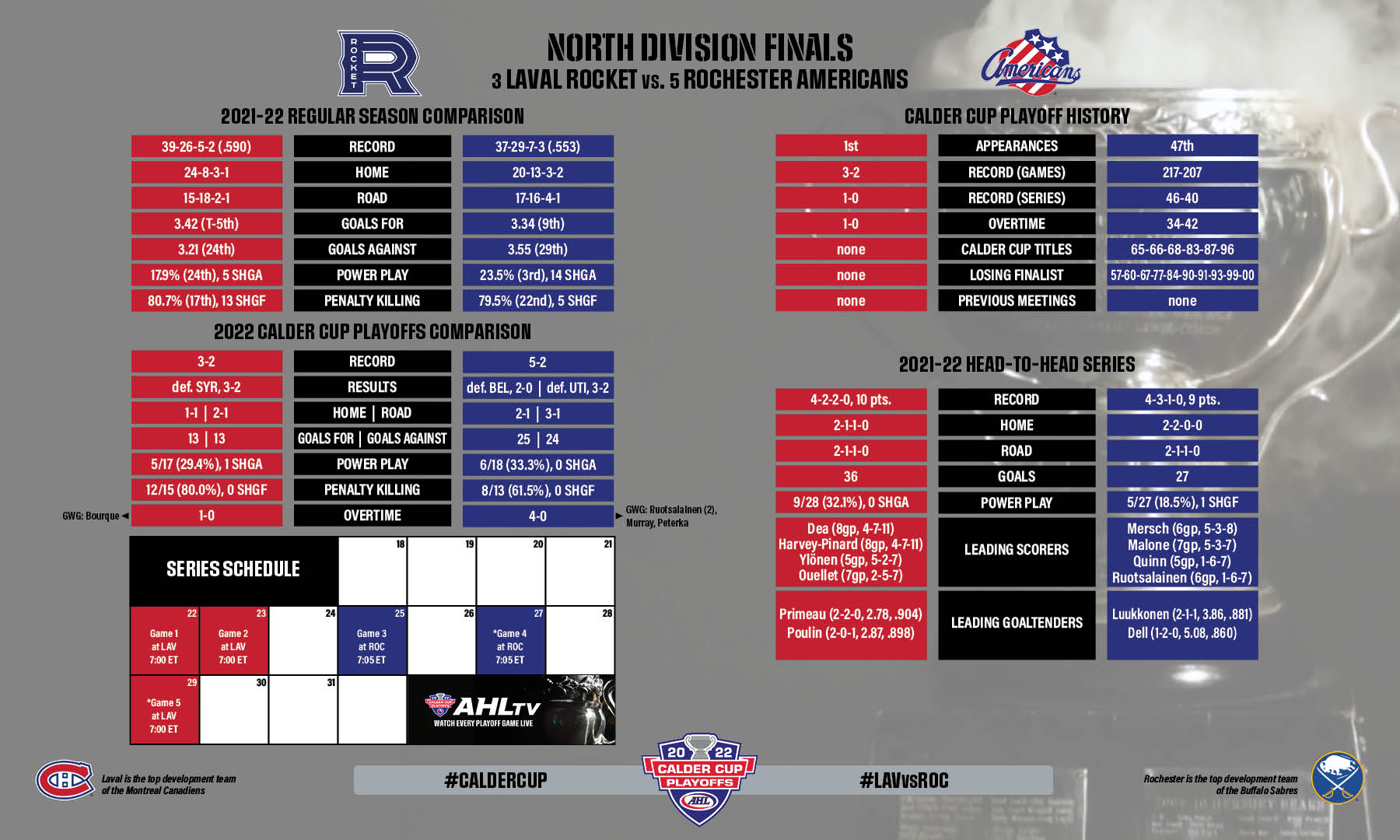 For the first time in 18 years, the Amerks are playing in the third round of the AHL’s Calder Cup Playoffs after closing out the top-seeded Utica Comets with a 4-2 win in Game 5 this past Thursday at Adirondack Bank Center. In doing so, the Amerks are the only fifth-seed among the eight remaining teams to advance thus far while the Comets, who owned the best record in the Eastern Conference during the regular season, became the only top seed to be eliminated. By defeating the Comets, the Amerks have reached the Division Finals for the 11th time in the 66-year history of the franchise.

The Amerks are seeking their first third-round series win since the 2000 postseason when they swept Hershey in four games in the Western Conference Finals to advance to the Calder Cup Finals against the Hartford Wolf Pack. 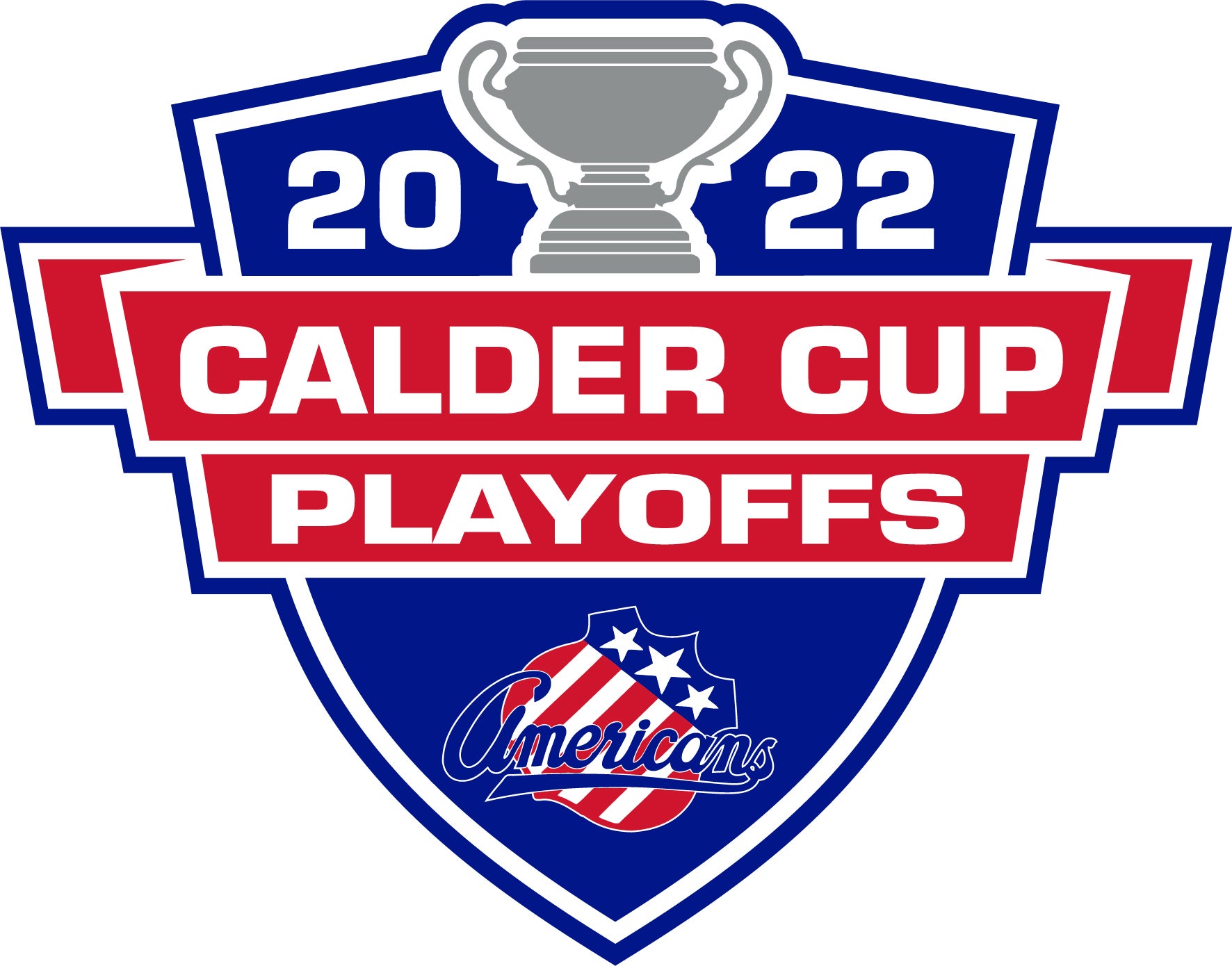 Coming into tonight, the Amerks own three of the AHL's top five point-getters, including the top two scoring rookies in the league.

With at least one point in eight of the nine playoff games thus far, Arttu Ruotsalainen currently leads the league with eight goals and 12 points, and remains one of only five players to reach the 10-point mark. He also held the longest active point streak (7) in postseason play entering the series.

With 10 assists through his first nine playoff appearances, seven of which have come in his last six games, Peyton Krebs leads all AHL skaters in assists while his 10 points overall are tied for most among all rookies.

JJ Peterka leads all AHL rookies with five goals and 10 points in nine games while goaltender Aaron Dell, who’s earned the start in all nine postseason contests for Rochester, is first in saves (224) and tied for first in wins (5).

Casey Fitzgerald is tied for the scoring league among defensemen with seven points (2+5) in nine games.

BY THE NUMBERS WHEN FACING ELIMINATION

Only three times in the 66-year history of the franchise have the Amerks rallied back to win a playoff series after dropping the first two games.

In two of the three occasions, however, Rochester would advance to the Calder Cup Finals, the most recent coming in 1999 when the Amerks overcame a 2-0 deficit in the Western Conference Finals against the Philadelphia Phantoms by winning the next four. It was also the last time the Amerks lost the first two games of the series on the road.

Rochester's most impressive comeback when facing elimination was during the 1960 Calder Cup Playoffs against Cleveland. After dropping the first three games of the series, the Amerks stormed back with four straight wins, including back-to-back 4-2 victories on home ice, to move onto the Calder Cup Finals against Springfield.

Coming into tonight, the Amerks boast a 29-38 all-time playoff record when facing elimination.

With tonight’s Game 1 marking the ninth meeting overall in 2021-22, the Amerks and Rocket have been fairly acquainted all season long. The Amerks finished with a 4-3-1-0 record against Laval during the regular season, claiming points in five of the eight matchups.

Rochester began the season-series with wins in the first three games and outscoring the Rocket 15-11 over that span. Laval countered with four wins, including a 4-3 overtime victory on April 8, before the Amerks closed out the series with a 4-3 overtime win of their own on April 13.

Over the last five years against Laval, Rochester holds a 17-6-1-0 record. Additionally, the Amerks boast a 9-2-1-0 mark at Place Bell and an 8-4-0-0 record within the friendly confines of The Blue Cross Arena.

Forward Michael Mersch posted a team-best eight points (5+3) in six games against the Rocket this season. Mersch recorded at least one point in five of his six games opposite Laval. Rochester’s team captain scored a goal in each of the first five matchups versus the Rocket before finishing the season-series with an assist on April 13.

Sean Malone netted five goals in seven games during the season-series while also earning a pair of assists. The Buffalo native also recorded a goal in each of the last five games against Laval. 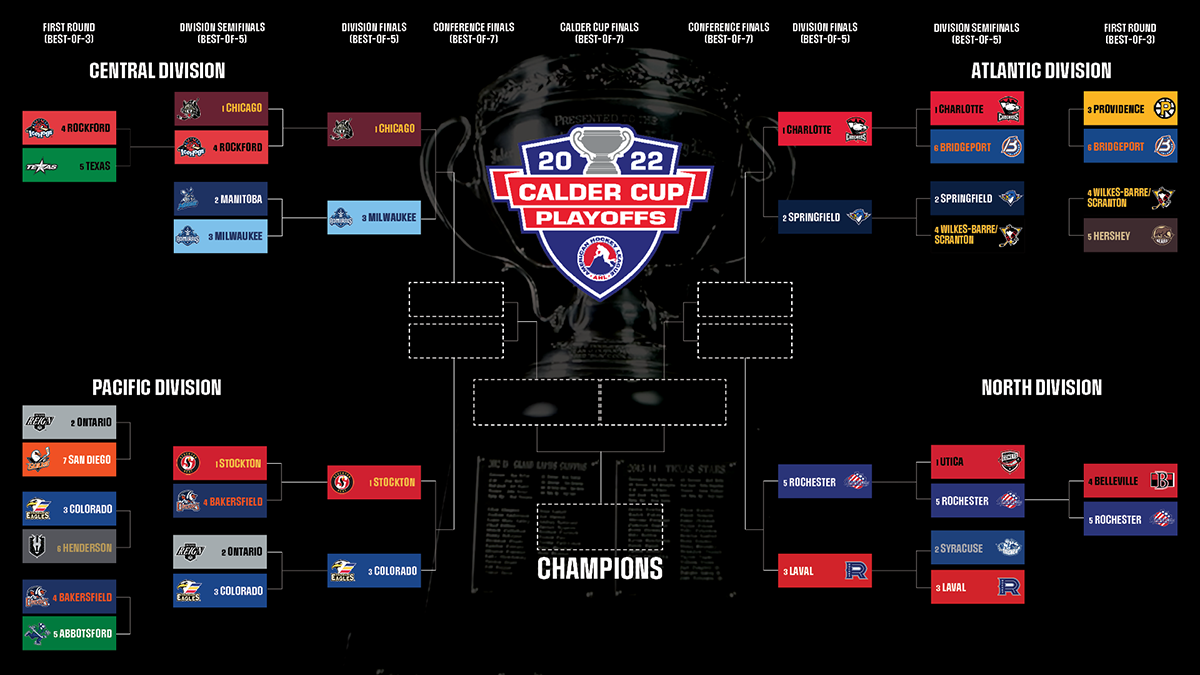 Rookie forwards JJ Peterka and Jack Quinn were among the three forwards named to the six-player 2021-22 AHL All-Rookie Team. They became the first set of Amerks rookies to earn the honors in the same season since former goaltender Mika Noronen and defenseman Dmitri Kalinin in 1999-2000. It’s also the first time in team history two forwards were selected to the same All-Rookie Team.

With 16 points to close out the final month of the regular season, which included four multi-goal efforts, Peterka became the first Amerk this season and the first AHL rookie to reach the 60-point mark. With Quinn adding two points in the 8-1 in over Utica, it marked the first time in franchise history the Amerks had two rookies reach the benchmark in the same season.

Rochester was a perfect 8-0-0-0 this season when both players recorded multi-point outings in the same contest. The Amerks were 16-1-2-0 when Quinn produced at least two points and 14-3-0-0 when Peterka recorded more than one point.

Rochester’s power-play went 65-for-277 with a 23.5% conversion rate that was third-best in the AHL. The Amerks’ 65 goals on the man-advantage were most among all North Division teams and finished seven shy of the AHL lead behind Ontario.

The Amerks scored at least one power-play goal in 41 of their 76 games this season and registered multiple power-play tallies in 16 overall, including a season-high four goals in the 7-3 win over Hershey back on Nov. 26 and in the 6-2 victory against Belleville on April 9.

PETERKA FLOURISHED IN SECOND HALF

After scoring just four times through the first three months of the season, Peterka notched 48 points (24+24) in 47 games to begin 2022, including goals in back-to-back games on five different occasions over that span.

Peterka, who was taken 34th overall in the 2020 NHL Draft by the Sabres, closed out the regular season leading all rookies in scoring with 68 points in 70 games. He also ranked first among rookies and fifth overall with 223 shots on goal. He only went two games all season without recording at least one shot on goal.

Peterka made his highly anticipated NHL debut on Dec. 28 as Buffalo hosted New Jersey before visiting the New York Islanders the very next day. Following his return to the Amerks, he totaled five points on two goals and three assists in two games before being honored as the AHL’s Player of the Week for the period ending Jan. 2, 2022.

Peterka was held scoreless just 19 times since Dec. 19 and had not gone more than two games without recording a point during that same span. More impressively, the Amerks were 14-3-0-0 this season when Peterka registered a multi-point game, including 7-0-0-0 on home ice.

Peterka, who was one of only five AHL rookies led his team in scoring, also led all rookies in goals (28) and finished third in assists (40).

In addition to being one of two Amerks named to this year’s AHL All-Rookie Team, Quinn was tabbed the winner of the Dudley (Red) Garrett Memorial Award as the AHL’s outstanding rookie for the 2021-22 season. He became the first Amerk to earn Rookie of the Year honors since Mika Noronen in 1999-2000.

Quinn became the first AHL player this season and just the 17th player in Amerks franchise history to score four goals in a game in the 6-5 overtime loss to Belleville on Jan. 15. More impressively, he scored all four goals consecutively, including the game-tying tally with 3.3 seconds remaining in regulation. He’s the first Amerk to have a four-goal game since Rochester native Derek Whitmore single-handedly outscored Hamilton on Nov. 25, 2011 (5-2 W).

Playing in just his 27th game of the season (March 18 against Cleveland), Quinn became the first Amerk to score 20 goals in the fewest number of games since Luke Adam reached the mark in 31 games during the 2013-14 campaign.

He was named the AHL’s Rookie of the Month for October after leading all first-year players with 10 points (5+5) through the first month of the regular season. In just six games to begin the season, Quinn surpassed his offensive output from his truncated 2020-21 campaign, and became the first AHL player to reach the 10-point mark this season.

Quinn was held scoreless just 14 times all season and had not gone more than two games without recording a point. He recorded a team-leading 19 multi-point performances this year.

THE BEST OFFENSE IS A GOOD DEFENSE

Rochester finished with two of the league’s top point-producing defensemen in Ethan Prow (10+39) and Oskari Laaksonen (5+29), who finished third and tied for 22nd in scoring amongst all blueliners, respectively.

Prow, who reached the 40-point mark for the second time in his AHL career, also finished third with 39 assists, which were 10 more than Laaksonen. His 10 goals ranked tied for ninth-most by a defenseman this season and only three off the league lead. Prow recorded 31 points (6+25) over his last 40 games despite seeing his season-long six-game point streak halted last Sunday in Cleveland. He totaled 130 points (37+93) over his last 185 AHL contests dating back to the 2018-19 campaign.

Laaksonen, who showed eight points (1+7) over his last 20 games, ranked fourth among defensemen with 23 power-play assists, as all but six of his 29 assists this season came on the man-advantage. Equally as impressive, 27 of his 34 points were on the power-play.

His best performance of the season came back on Jan. 12 when he recorded a career-high four assists in the 7-6 win over Utica, including three in the first period and three of which came on the power-play. He finished two assists shy of tying the franchise record for most in a single game.

The Amerks had four of the AHL’s top scoring rookies in JJ Peterka, Jack Quinn, Brandon Biro and Linus Weissbach, all of whom combined for 207 points (82+125) through Rochester’s 76 regular games this season.

Quinn became the 101st AHL player this season to make his NHL debut when he took the ice against the Tampa Bay Lightning on Jan. 11. He finished with team-highs in shots (3) and shot attempts (6) while earning 16:30 of total ice time. He then returned to the Sabres a day after scoring his 18th goal of the season for Rochester and was rewarded with his first two NHL points, including a goal against Vezina Trophy winner and Stanley Cup champion Braden Holtby in the Sabres’ 5-4 loss to the Dallas Stars on Jan 20.

With five points (3+2) over his final eight games since returning to the lineup, Biro finished tied for 12th in scoring amongst all rookies with 41 points (12+29) in 48 games. With his 40th point on the season against Cleveland on April 23, Biro became the third different Amerks rookie this season to reach the mark, joining Peterka and Quinn, and sixth overall.

Weissbach finished his first pro season with 37 points (16+21) in 67 games, including a goal in the regular season finale against Utica on April 29.

How the two teams match up