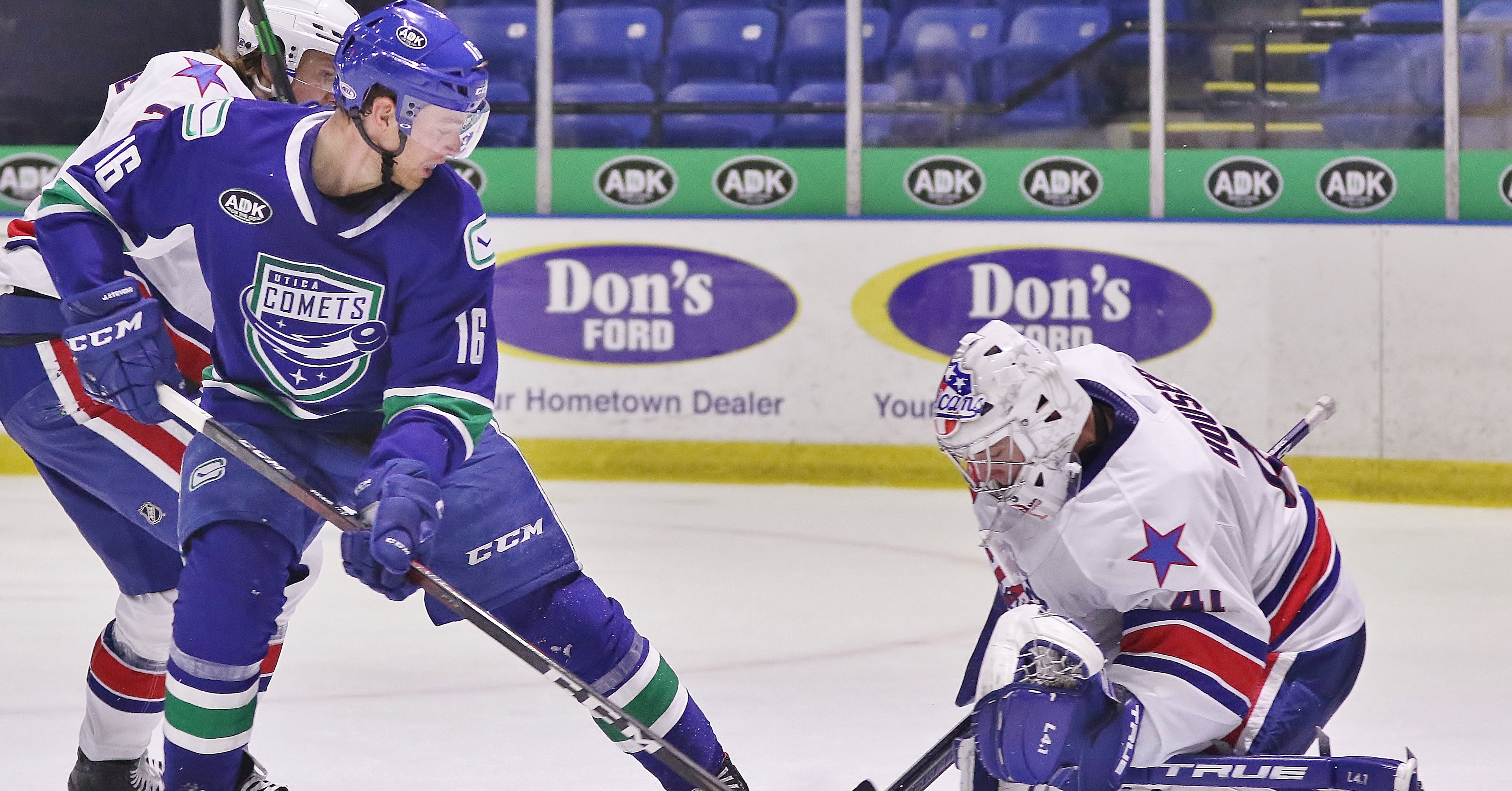 AMERKS SCORE LATE, BUT COME UP SHORT TO COMETS

Despite the loss, however, Rochester has collected at least one point in 23 of the last 34 games against Utica dating back to the start of the 2017-18 campaign, going 17-11-2-4 over that span.

Goaltender Michael Houser (0-1-0), fresh off a four-game stint with the Buffalo Sabres, got the loss as he made 34 saves on 37 shots he faced in his Amerks debut, becoming the fifth different netminder to appear in a game this season for Rochester.

Utica forward Vincent Arseneau (1+0) opened the scoring in the first period with his fourth of year, while defenseman Jett Woo (1+0) and forward John Stevens (1+0) rounded out the scoring for the Comets, who improved to 9-2-0-0 in their last 11 home games. Tyler Tucker finished with a team-high two assists.

Goaltender Michael DiPietro (3-1-0) earned his fourth straight start, extending his win streak to two games while fending off 33 shots from the Amerks.

Trailing 2-0 in the waning minutes of the third period, Rochester pulled Houser in favor of the extra attacker, but the Comets would capitalize despite being a man down. From in-between the bluelines, Stevens converted on a long rage shot with 2:33 remaining in regulation to give Utica its largest lead of the night.

It would take until there was just 1:16 left to go in the contest when the Amerks finally found the back of the net to spoil DiPietro’s bid for a shutout.

From between the face-off circles, Franco fired an initial shot that DiPietro turned aside. Waiting just to the left of the crease, Warren found the rebound and tipped the puck in for his third of the season to make it a 3-1 game.

Heading into the middle frame with a one-goal lead, Utica held off Rochester for another 20 minutes of play while finding its second marker of the contest.

On the rush, Nolan Stevens drove the puck through the neutral zone and connected with Woo before gaining the offensive zone. Once Woo retrieved the puck, the Comets defenseman boomed a shot from the top of the left circle towards the Amerks crease. As Woo’s chance skipped across the ice, the puck took a sharp bounce and flew over the stick-side of Houser and into the upper left corner at the 6:54 mark.

For the remaining 13:06 of the second stanza, Rochester was held to just three shots on goal heading into the final 20 minutes of play.

As the clock ticked down on the opening period, Utica held Rochester scoreless while getting on the board not even five minutes into the period.

As Cameron, who played four years of college hockey at Rochester Institute of Technology, eluded Amerks defenseman Ryan Jones from behind the net, he retrieved the puck back on a low cycle and made a feed to Arseneau, who was stationed to the left of the blue paint. The quick pass from Cameron enabled Arseneau to sneak the puck past Houser to put Utica in front 1-0.

Heading into the first intermission, the Comets held a slight 11-9 advantage in shots while both teams were unsuccessful on the power-play to begin the contest.

The same two teams exchange pleasantries again for the second time in three nights on Friday, May 14 as the Amerks kickoff their final homestand of the 2020-21 campaign with a rematch against the Comets at The Blue Cross Arena. Game time is slated for a 7:05 p.m. start and will be carried live on The Sports Leader 95.7 FM/950 AM ESPN Rochester as well as AHLTV. The North Division matchup will also be tape-delayed on CW Rochester beginning at 10 p.m.