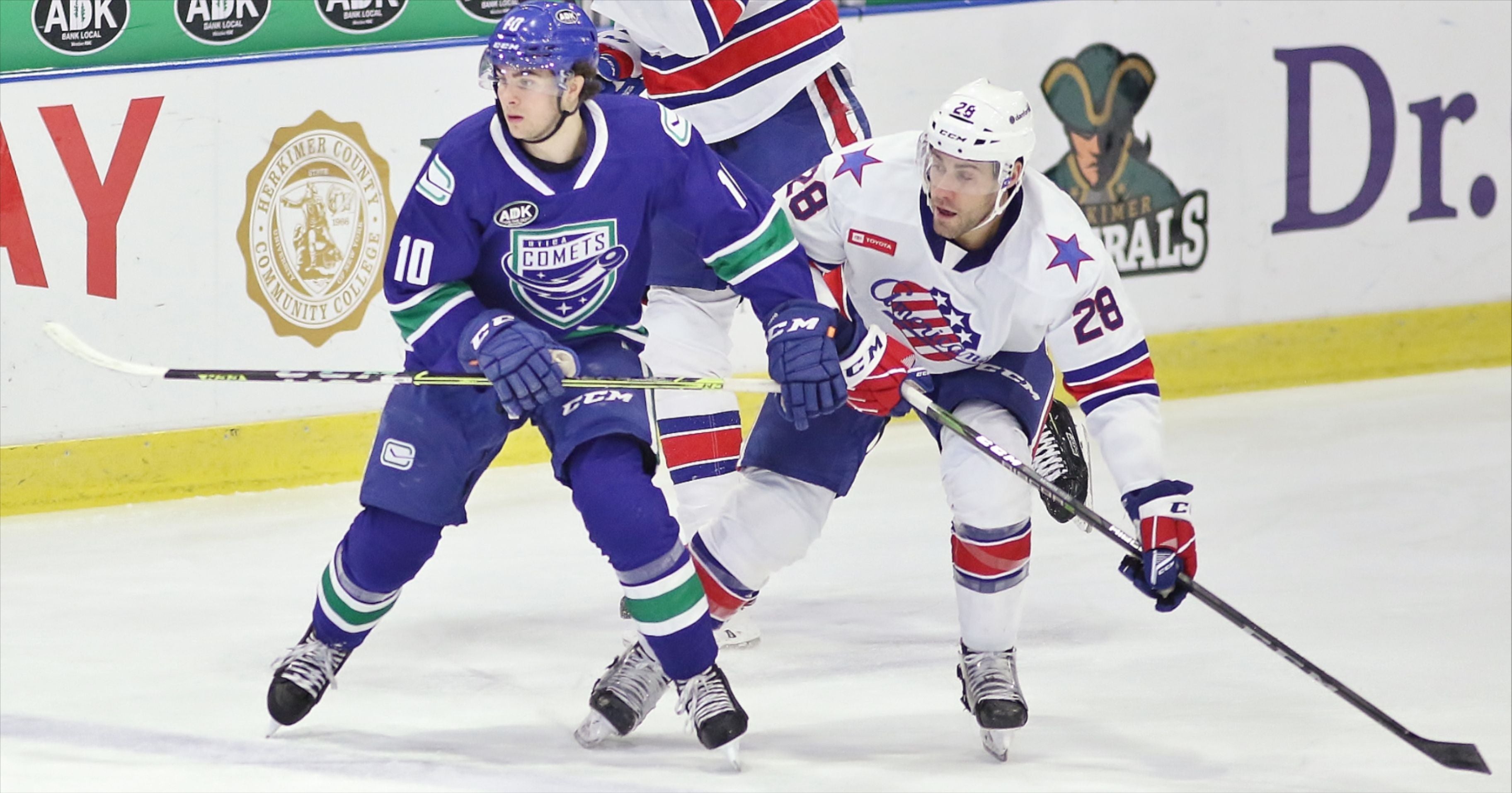 (Utica, NY) … Despite a pair of goals by captain Steven Fogarty, the Rochester Americans (4-2-0-0) were on the wrong side of a 7-2 score against the Utica Comets (4-1-0-1) Friday night at the Adirondack Bank Center.

The matchup was the middle contest of Rochester’s three-game road swing as well as the third of 14 scheduled meetings against the Comets this season. While Rochester saw its four-game win streak come to an end, the club has collected at least one point in 20 of the last 29 games against Utica dating back to the start of the 2017-18 campaign, going 15-9-2-3 over that span.

Along with Fogarty getting on the scoresheet, Michael Mersch, C.J. Smith and Oskari Laaksonen all recorded an assist in the game. The assist gives Mersch helpers in back-to-back games while Smith (2+4) and Laaksonen (0+6) each picked up their sixth points of the season.

Goaltender Ukko-Pekka Luukkonen (3-1-0) took his first loss of the campaign in the crease while making 32 saves. The Finnish netminder has made 30-plus saves in each of his last three appearances.

The Comets offense was fueled by forward Jonah Gadjovich (2+1) and rookie defenseman Jack Rathbone (0+3) as each turned in a three-point outing. Rathbone also made his professional debut along with picking up a game-high three assists. John Stevens (2+0), Sven Baertschi (1+1) and Nolan Stevens (0+2) also recorded multi-point efforts while Josh Teves and Vincent Arseneau rounded out the scoring.

Much like on opening night between the two North Division teams, veteran goaltender Jon Gillies (3-0-1) allowed a pair of goals but still managed the win, his third of the season.

Entering the third period deadlocked at two goals apiece, Utica came out and successfully killed off 19 seconds of a Rochester carryover power-play and did not look back. The Comets rode the early momentum and scored five straight unanswered goals in just over 11 minutes to jump out to a 7-2 advantage.

Gadjovich opened the scoring frenzy with his first of the night 5:34 into the final period of regulation before Teves doubled the lead as he found the back of the net less than two minutes later.

Rochester, desperate to get within a goal and cut into Utica’s 4-2 advantage, began to press. Unfortunately, the plan would backfire as Arseneau picked off an outlet pass in the center of the offensive zone before he snapped in his first of the campaign at the 10:04 mark.

Utica then added a pair of goals just 14 seconds apart from Baertschi and another from Gadjovich to complete the scoring on the night with just under four minutes left in the period to earn the 7-2 victory, snapping Rochester’s four-game win streak.

Having been idle since last Thursday night, Utica came out the first period and registered six of the game’s first eight shots before the first media timeout. As well as holding an early shot-advantage, the Comets opened the scoring 3:39 into the period. Utica got on the board when John Stevens pounced on a loose puck out in front of the goal-mouth before he stepped to his left and flipped the puck past a sprawling Luukkonen.

The Amerks were unable to even the score during the first period, but five seconds after earning their third power-play, tied the game 2:44 into the second period.

After winning the face-off to the right of Gillies, Laaksonen dished a pass to Smith along the near boards. As Smith tucked down the wall, he centered a pass to Fogarty to even the contest.

Utica reclaimed its lead as John Stevens added his second of the night with 7:24 left in the second stanza, however, Fogarty teamed up with Mersch to even the score at 2-2 going into the third period.

The assist by Mersch was his 250th career professional point while Fogarty’s tally marked his ninth career two-goal outing and first since Dec. 7, 2019 as a member of the Hartford Wolf Pack.

The Amerks close out their three-game road swing on Monday, March 1 when they face-off against the Syracuse Crunch for the second time in as many weeks at Upstate Medical University Arena. Game time is slated for a 7:00 p.m. start and will be carried live on The Sports Leader 95.7 FM/950 AM ESPN Rochester as well as AHLTV.