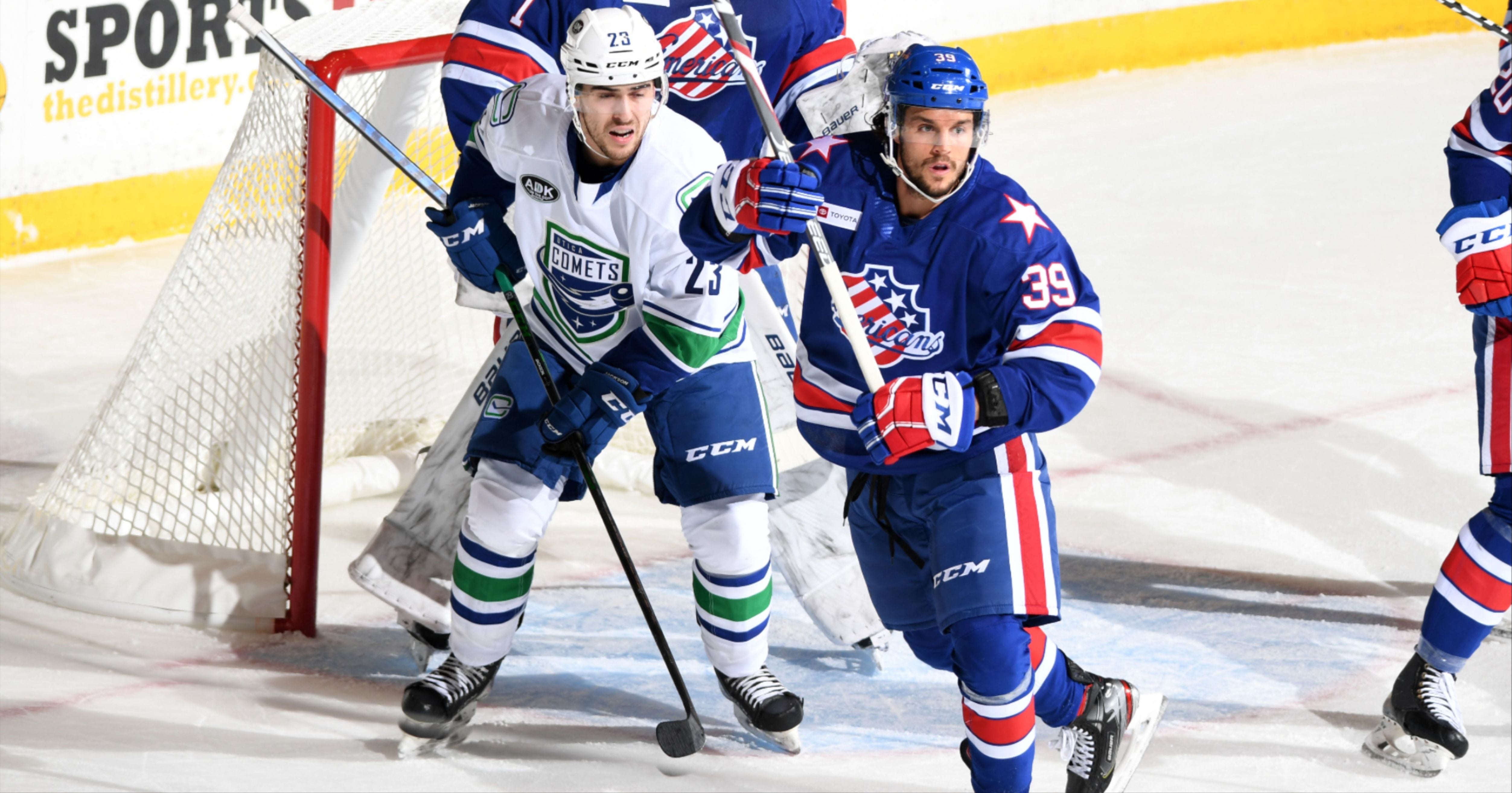 On the strength of a pair of goals from defenseman Casey Fitzgerald and two assists by Steven Fogarty, the Rochester Americans (5-3-0-0) avenged last Friday’s setback by doubling up the first-place Utica Comets (5-1-0-1) with a 4-2 win in a North Division matchup Wednesday at The Blue Cross Arena.

With the victory, Rochester has collected at least one point in 21 of the last 30 games against Utica dating back to the start of the 2017-18 campaign, going 16-9-2-3 over that span. Additionally, the Amerks earned their third straight win on home ice after dropping a 3-2 decision to the Comets on opening night.

With his first-career two-goal outing, including his first shorthanded marker, Fitzgerald is the first Amerks blueliner to score twice in a game since former defenseman Casey Nelson netted a pair as part of a three-point game back on Nov. 1, 2019 against Binghamton.

Fogarty recorded his second two-point game of the season while Brett Murray and Arttu Ruotsalainen scored their third and second goals of the slate, respectively. Murray has collected five points (2+3) in the last five games. Michael Mersch, who was held without a point in his first three outings with the club, picked up an assist to push his point streak to four games.

Goaltender Ukko-Pekka Luukkonen (4-2-0) earned his third straight win in the Flower City while making 31 saves. The Finnish netminder has made 30-plus saves in four of his first six games of the season, which included a career-high 43 stops back on Feb. 12 in a 7-3 triumph at Cleveland.

The Comets offense was powered by forward Jonah Gadjovich’s team-leading seventh goal of the campaign while rookie defenseman Jack Rathbone added his first pro goal in the loss. Goaltender Jon Gillies (3-1-1) suffered his first regulation defeat of the season while stopping 19 shots he faced.

On the second shift of the contest, Utica’s Kole Lind handed Will Lockwood the puck just outside the blueline prior to the duo entering the Amerks zone. As Lockwood went down the boards, he fired a shot off the shoulder of Luukkonen. With bodies crashing towards the goal-mouth in search of a rebound, Gadjovich spotted the loose puck and poked it behind the Rochester netminder, giving the visitors an early 1-0 lead just 59 seconds after the opening face-off.

Despite being hemmed inside their own zone much of the first 20 minutes of play and trailing 1-0, Rochester capitalized on an icing infraction to tie the contest at one prior to the break.

Following a face-off to the left of Gillies, Dea won the draw back to Fitzgerald at the point and the blueliner wristed a shot that glanced off the crossbar and in behind the screened netminder. The marker was Fitzgerald’s first of the slate while Dea picked up his team-leading sixth assist and ninth point.

After tying the contest at one late in the first period, Fitzgerald doubled his goal total and put the Amerks on top with his second of the night just nine seconds into the second stanza. With a tie-up between the centers to start the frame, Fitzgerald scooped up a loose puck in the neutral zone and carried it into the offensive zone. While warding off a defender, he slipped the puck between Gillies’ pads to give Rochester a 2-1 lead.

Later in the frame, the Amerks doubled their lead thanks to Murray’s third of the slate at the 15:07 mark, giving the second-year pro five points in as many games.

The third period was cruising along, and it seemed Rochester was going to take the 3-1 victory. However, the Comets pulled within a goal as Rathbone blasted his first goal while on a two-man advantage at the 12:37 mark.

The Amerks successfully killed off the rest of the power-play, and despite being whistled for its seventh infraction of the contest late in the game, Remi Elie centered a pass to Ruotsalainen to seal the 4-2 win into an empty Utica net. The assist was Elie’s 100th point of his pro career.

The Amerks make a return trip back to Syracuse on Saturday, March 6 to face-off with the Crunch for the second time this week at Upstate Medical University Arena. The North Division showdown is slated for a 7:00 p.m. start and will be carried live on The Sports Leader 95.7 FM/950 AM ESPN Rochester as well as AHLTV.