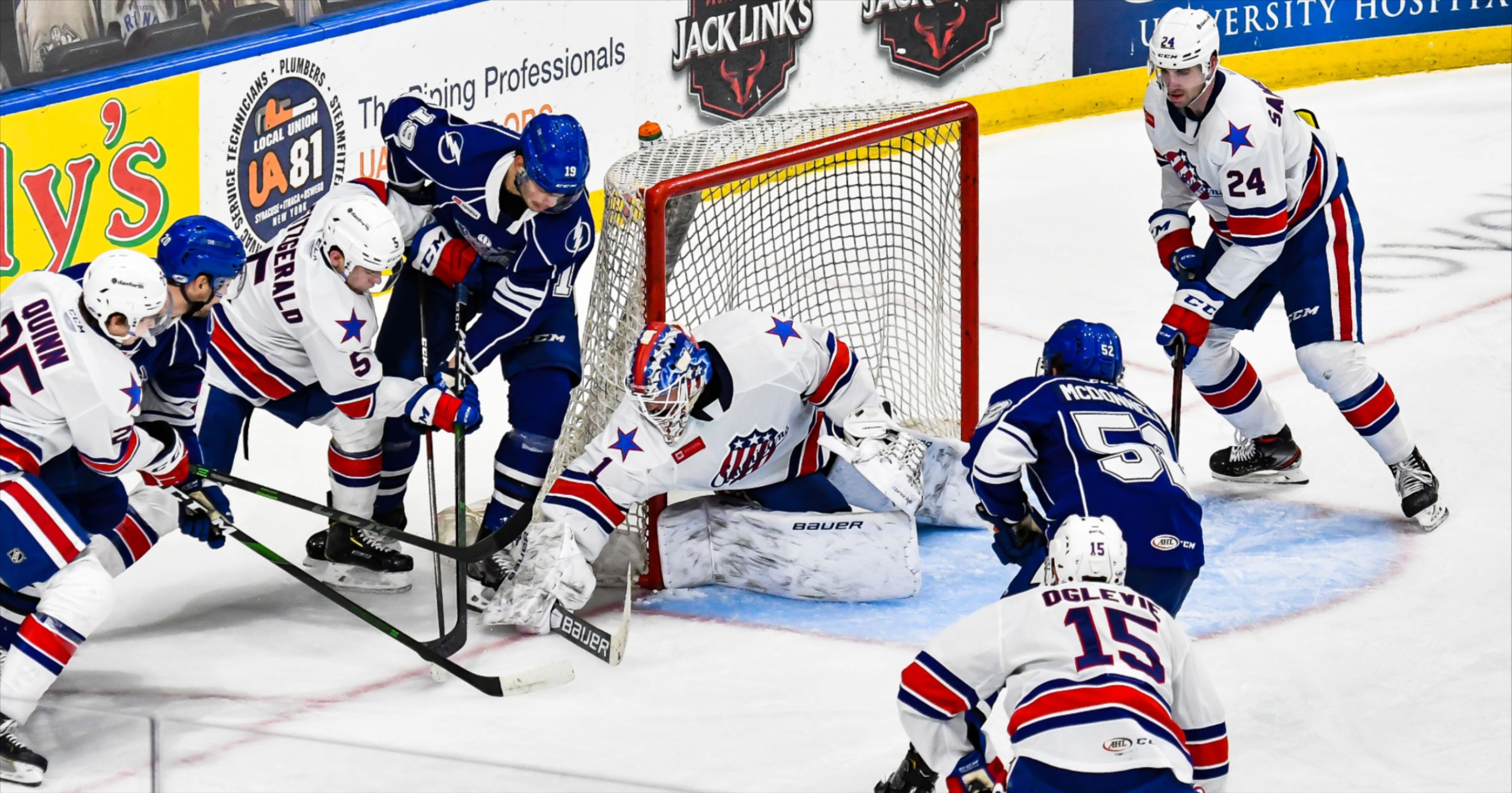 (Syracuse, NY) … A second-period surge and a three-point night from leading point-getter Jean-Sebastien Dea would solidify the Rochester Americans’ (6-3-0-0) sixth win of the year and third over the Syracuse Crunch (2-5-1-0) in a 4-2 victory over their North Division rivals Saturday at Upstate University Medical Arena.

The contest was the first of two consecutive road games as well as the fourth of 12 scheduled meetings against the Crunch this season. With the win tonight, the Amerks push their record to 15-8-1-1 in their last 25 games against their North Division foe.

Captain Steven Fogarty (1+0) notched his fifth goal of the year – and fourth on the power-play – in just nine games, a mark that just last season took him 20 games to reach. The veteran forward is now tied for the league lead in power-play goals this season with Cleveland’s Trey Fix-Wolansky and Utica’s Kole Lind.

Dea (1+2) tallied his fourth multi-point effort of the campaign with a pair of assists and a late goal, making him the first Amerk to reach double digits points in 2020-21 and moving him into five-way tie for second in the league in scoring with 12 points through his first eight games. More impressively, Dea has recorded at least one point in all but one game so far this season, including opening the campaign with three straight multi-point effort for this first time in his seven-year pro career.

Forwards Andrew Oglevie (1+0) and Arttu Ruotsalainen (1+0) both notched their third goals of the season, respectively, while Jack Quinn (0+1) and defensemen Casey Fitzgerald (0+1) and Mattias Samuelsson (0+2) each added assists on the night.

For the second consecutive game, goaltender Ukko-Pekka Luukkonen (5-2-0) recorded a win for his fifth of the season while stopping 27 of the 29 shots he faced. The Finnish netminder is now tied for third in the AHL in wins and has made 30 or more saves in four of his last six appearances dating back to a career-best 43-save performance at Cleveland on Feb. 12.

The two Crunch tallies were recorded by Serron Noel (1+0) and Taylor Raddysh (1+0), both of which were on the man-advantage. Forwards Peter Abbandonato (0+1), Jimmy Huntington, former Amerk Scott Wilson (0+1) and defenseman John Ludvig (0+1) all added the helpers throughout the course of the contest.

In his fourth game of the year, and third against Rochester, Spencer Martin (2-2-0) took the loss despite making 23 saves.

Heading into the second period, the score was all tied up at one apiece before the Amerks pulled away with their first two-goal lead of the night.

From the neutral zone, Remi Elie drove the puck down the right wing, where he would send a backhanded pass to Dea, who was positioned in-between the dots. Dea’s initial offer was denied by Martin, but Ruotsalainen made good on the second opportunity to shovel the puck over the Crunch netminder for his third of the year.

With 4:05 left to go in the middle frame, the Amerks would get on the board once again to push the score to 3-1 in their favor.

Catching the Crunch on a change, the Amerks would find themselves in a three-on-one situation within their offensive zone. From the right face-off dot, Samuelsson sent a pass to Quinn, who quickly one-touched it back to the slot for a wide-open Oglevie to redirect it past Martin for Rochester’s third goal of the night.

As the Amerks headed into the final frame with a two-goal cushion, Syracuse pulled within one before the final buzzer.

On the Crunch’s seventh power-play opportunity of the contest, Raddysh was the recipient of a perfect pass from Wilson and sent a wrist shot past Luukkonen to make it a one-goal game. 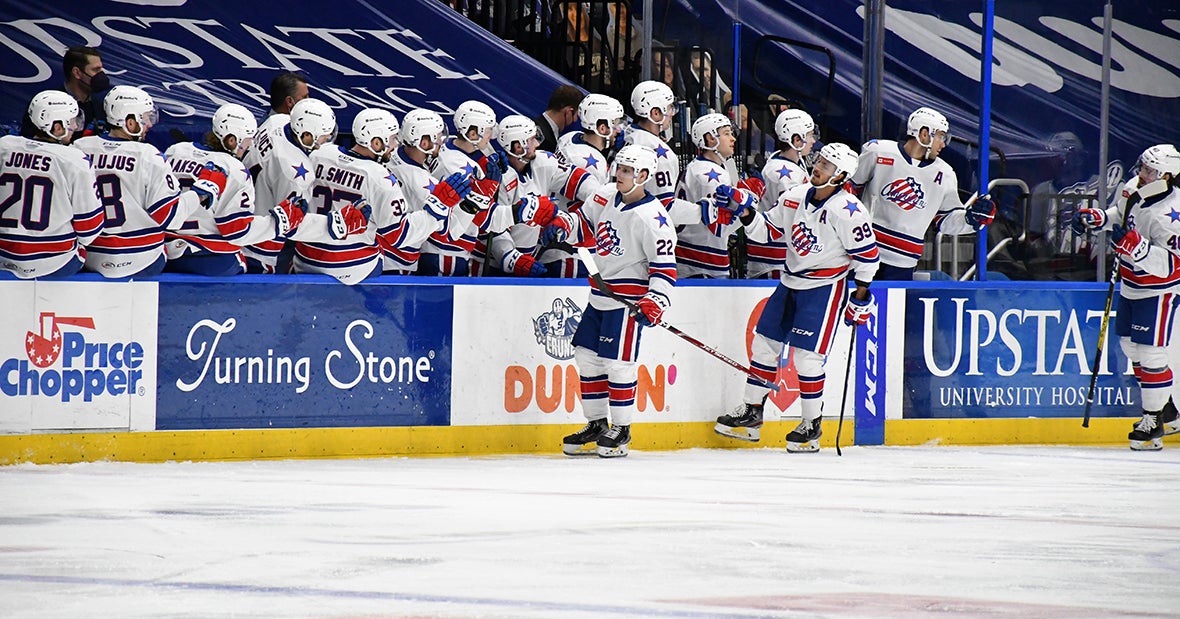 The Amerks then went on to seal the win with a late power-play marker with only 39 seconds to go.

Samuelsson’s shot from the left face-off circle pinballed to the right of the Syracuse net, Dea swooped in to backhand the puck past Martin for his third point of the night and 11th of the season to secure the 4-2 win for Rochester.

With a combined 24 shots on goal from both teams in the first period, it would be the Amerks that got the scoring started with the first of two power-play goals of the night.

To the right of the Crunch crease, Fogarty rimmed the puck around the boards and Dea picked up the pass at the edge of the right face-off dot. As Dea lasered a shot in at the Syracuse netminder, Martin would make a pad save, kicking the rebound out to where the original shot took place. Fogarty was ready to pounce on the loose puck, sending his shot over Martin’s blocker despite fighting off two Crunch skaters to give the Amerks a 1-0 lead at the 7:20 mark.

The Amerks have scored a power-play goal in eight of their last 12 games against Syracuse dating back to last season, going 13-for-48 (27.0%) with the man-advantage over that span.

In similar fashion, the Crunch came back within the first stanza with a power-play of their own.

As Amerks defenseman Griffin Luce took a hooking penalty at the 12:43 mark, Noel would notch his first as a pro to get the Crunch on the board during their first of eight man-advantage opportunities of the night.

The Amerks continue their two-game road trip on Wednesday, Mar. 10 as they take on the Utica Comets at the Adirondack Bank Center for the fifth of 14 scheduled matchups this season. Game time is slated for a 7:00 p.m. start and will be carried live on The Sports Leader 95.7 FM/950 AM ESPN Rochester as well as AHLTV.