Despite opening the scoring 3:20 into the contest, the Rochester Americans (10-6-1-1) were unable to generate much offensively, being held to a single goal and season-low 15 shots in a 5-1 loss to the Lehigh Valley Phantoms (8-6-1-1) Saturday at PPL Center.

Despite the loss, the Amerks recorded four of six points this week against the three different Atlantic Division teams, two of which ranked atop the AHL in Providence and Bridgeport. Rochester earned at least one point in six of its nine games in November and overall boast a 10-6-1-1 record and sit one point back of the Toronto Marlies, who are first in the North Division standings.

Jiri Kulich scored his second power-play goals in as many nights for the Amerks during the first period from Brett Murray and Lukas Rousek. Murray finished off the three-game week with six points on three goals and three assists while Kulich extended his point streak to match his season-high of four.

Goaltender Michael Houser (3-2-0) faced a season-high 40 shots but suffered his second defeat of the campaign. The netminder had not allowed five or more goals in his previous 11 appearances, which included both games during the 2022 Calder Cup Playoffs.

Lehigh Valley forwards Olle Lycksell (1+3) and Artem Anisimov (2+1) combined three goals and four assists as they each registered multi-point games. Defensemen Kevin Connauton (0+2) and Louie Belpedio (0+2) both tacked on a pair of helpers while Tyson Foerster and Elliot Desnoyers rounded out the scoring.

Rookie netminder Nolan Maier made his AHL debut and stopped 14 of the 15 shots he faced to pick up the victory in-between the pipes.

While Rochester was being outshot 5-0 in the first three minutes of the contest, the club drew a high-sticking penalty for the first powerplay of the night.

15 seconds into the infraction the Amerks used precision passing as everyone on the unit touched the puck after Kulich won the draw back to Ethan Prow. The defenseman drifted towards the center of the zone before he handed the puck to Rousek inside the dot. Rousek and Murray used tic-tac-toe pass then Kulich finished off his fourth of the season in-between the dots at the 3:20 mark.

The shot was the Amerks first shot of the contest but just one of four they generated in the period. 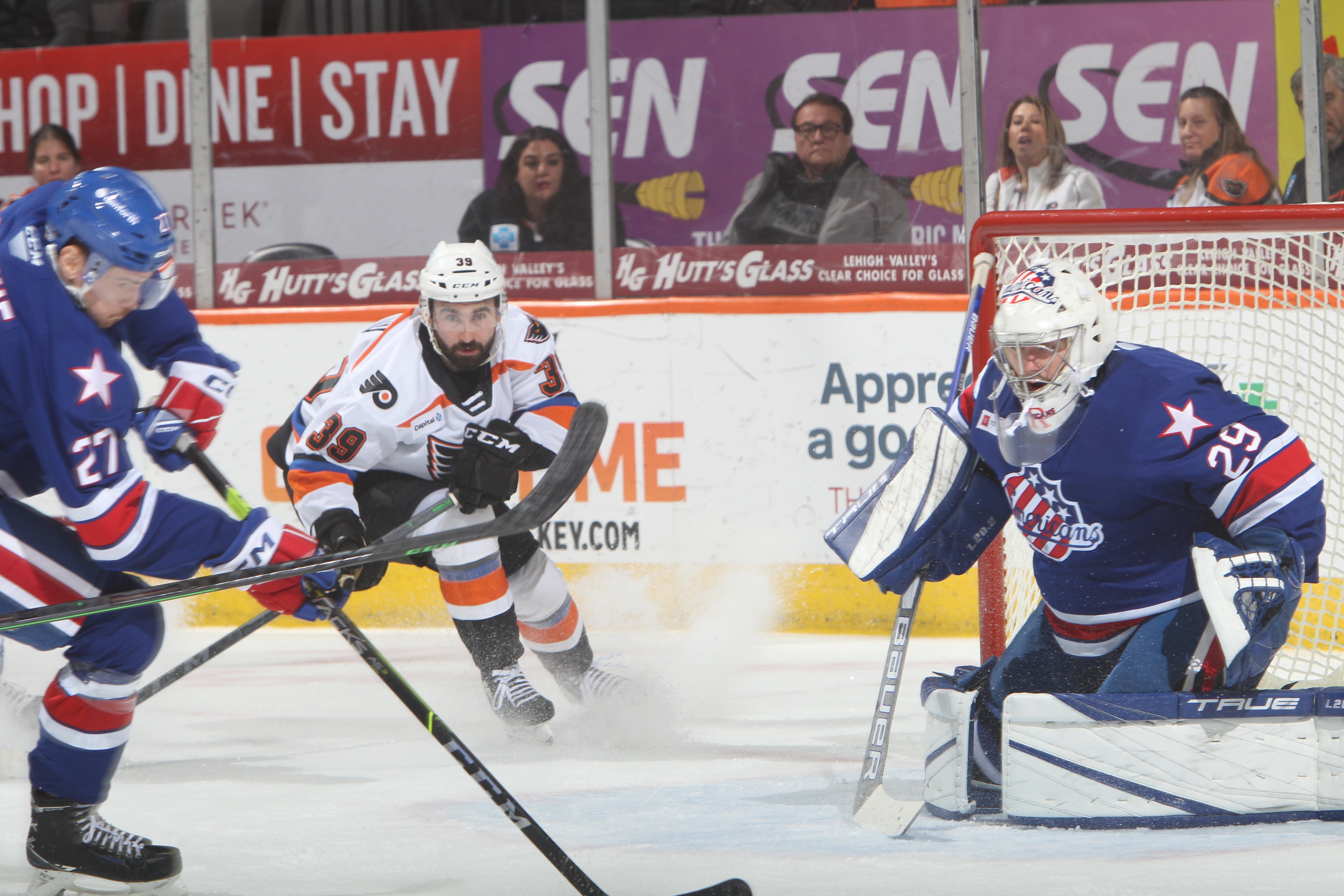 The 1-0 lead last roughly four minutes before Lehigh Valley flipped a one-goal deficit into a 2-1 lead as they scored a pair of markers seven minutes apart.

On the first goal, the Phantoms held the puck in the right corner of Houser before Kevin Connauton gathered a pass from Artem Anisimov atop the opposite point. The defenseman sent a shot-pass for Foerster to tip past into the back of the net at the 7:59 mark.

Lehigh Valley took its first lead of the night as they capitalized on power play when Anisimov and Lycksell exchanged give-and-go deep inside of the offensive zone. Anisimov eventually finished off the play as he tucked a shot under the crossbar but overtop Houser’s left shoulder with 5:56 left in the opening period of play.

Following the first period, where Amerks trailed 2-1 on the scoreboard as well as were outshot 18-4 going, Lehigh Valley plotted twice more in the middle period to grab a commanding three-goal advantage.

The Phantoms came out in the second period, much like the first, heavily outshooting the Amerks and drew their second power play of the night with nearly 10 minutes left to play.

On the man-advantage, Lycksell was parked inside the right circle of Houser and he blasted a one-time feed from Cam York through the zone. The shot glanced off the post and went in inside the net so quickly it required video review to determine it was indeed a good goal.

Less than three minutes later, Anisimov snuck through the backdoor and tapped in a feed by from Lycksell to make it a 4-1 score at the break.

Lehigh Valley had a 34-7 shot lead ahead of the start of the final 20 minutes of play and 4:50 into the frame, they finished off the scoring as Desnoyes netted his seventh of the season.

The Amerks begin the final month of 2022 as they continue their three-game road-swing on Thursday, Dec. 1 for the first of two-game set with the Cleveland Monsters. Game time from the Rocket Mortgage FieldHouse is slated for a 7:00 p.m. start and will be carried on The Sports Leader 95.7 FM/950 AM The Fan Rochester as well as AHLTV.

The Amerks show a 4-0-1-0 record against Lehigh Valley over the last five years on home ice as compared to a 1-3-0-1 mark in Allentown in that same time frame. Prior to tonight, Rochester had earned at least one point in seven of the last nine games against Lehigh Valley dating back to Dec. 30, 2016, going 5-2-1-1 over that span. By going 16-for-63 while on the man-advantage, Rochester ranks sixth in the league with a 25.4% conversion rate.