AMERKS FLIP THE SCRIPT ON ROCKET FOR FIRST ROAD WIN

By splitting the weekend series, Rochester finished the first month of the regular season with .571 winning percentage as they show a 4-3-0-0 record through its first seven games. It marks the seventh straight season the club has a .500 winning percentage or better dating back to 2016-17.

Along with Biro, Jobst, Rosen and Kulich all earning points, Linus Weissbach, Brett Murray, and Anders Bjork all scored one goal apiece in the win. Weissbach and Biro are tied for the team’s scoring lead with seven points on the young season while Rosen and Kulich pace the team’s rookies.

Defenseman Matt Bartkowski, who was signed to a professional tryout Saturday morning, made his Amerks debut while Houser made his first start of the campaign. Houser finished the contest making 31 saves to earn his first AHL win since Jan. 2, 2022.

Anthony Richard provided the lone tally for the Rocket as he opened the scoring with his fourth of the season from Jesse Ylönen during the first period. Goaltender Kevin Poulin (0-3-0) stopped 26 of the 30 shots he faced but suffered his third straight defeat.

Just over a minute after Richard gave the Rocket at 1-0 lead at the 8:54 mark of the opening period, Rochester responded to flip the one-goal deficit into a 3-1 cushion as they tallied three goals in a span of 2:43.

On the Amerks first goal of the frame, Rosen gathered a loose puck just out in-front of Poulin and slipped the rebound from Jobst and Kulich. Prior to finding the puck, Kulich provided a pass to Jobst, but the forward was initially denied and the rebound fell to Rosen near the midway point of the frame.

Moments after Rosen tallied his second of the season, Malone carried the puck out of the Rochester zone before dishing a pass to Bjork across the ice. Bjork raced into the offensive zone and used Warren along with a Rocket defenseman as a screen before uncorking a shot just inside the far post to make it a 2-1 Amerks lead.

Warren earned his first point of the season as he began the transition to Malone. 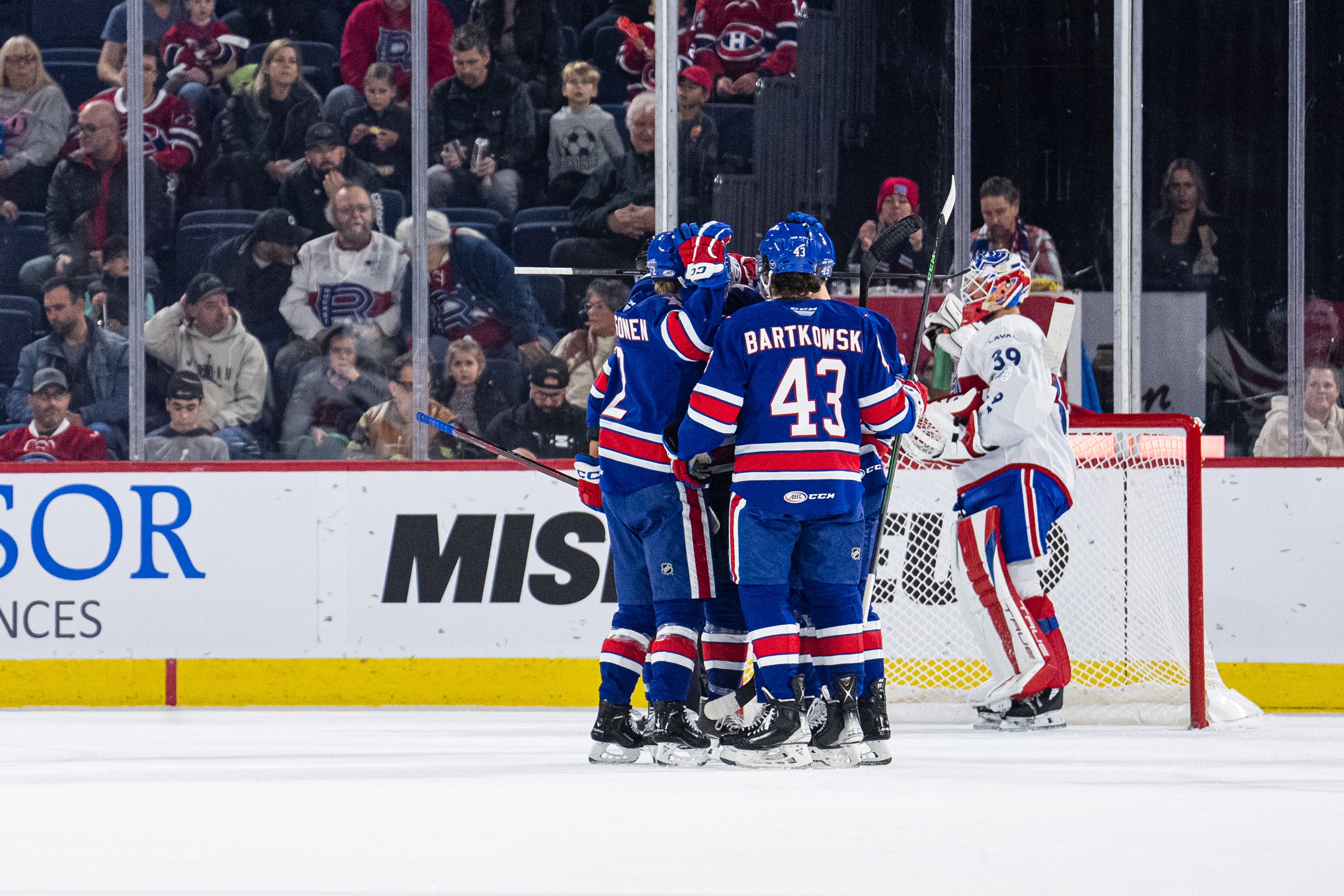 To close out the scoring frenzy, Weissbach was the recipient of a centering feed in-between the face-off circles from Biro and Rousek with 7:13 left in the frame.

After taking a 3-1 lead into the first intermission, the Rocket drew a pair of penalties midway through the second period to gain a 5-on-3 man-advantage for 23 seconds, including a double-minor for high sticking.

During the infractions, Houser made timely saves to preserve the two-goal advantage, paving way for Rochester to increase its lead to 4-1.

Prior to making the score a three-goal advantage, Rochester was unable to capitalize on the power-play, but the puck stayed inside the zone as Prow kept it inside the blueline.

After the defenseman fired a shot, the rebound was gathered to the right of Poulin and he fired it back to the net. As the puck reached the crease, Murray tipped it between the pads of the netminder with 18 seconds remaining for his third of the campaign. 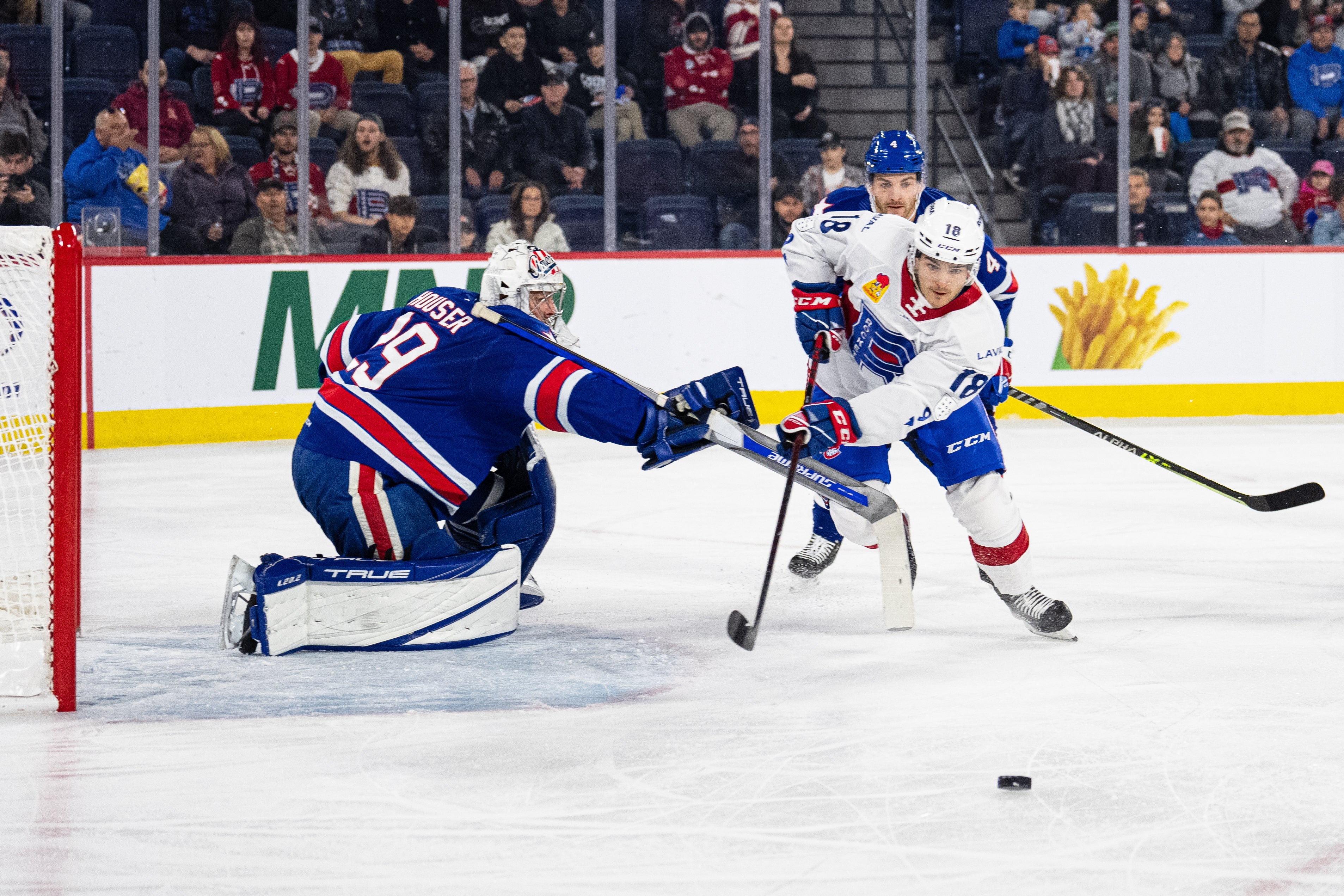 With the score 4-1 to start the final stanza, Laval began the period outshooting Rochester 10-2 and pressed to trim the deficit, however, Houser kept the home club off the scoreboard.

Later in the period, the Rocket pulled Poulin for an extra-attacker, but Kulich sealed the 5-1 victory as he tucked the puck into vacant net from Jobst and Rosen for his first North American goal.

The Amerks begin the second month of the season with three games over a four-day stretch starting on Wednesday, Nov. 2 versus the Syracuse Crunch for a 7:05 p.m. puck-drop at The Blue Cross Arena.  All of the action will be carried live on 95.7 FM/950 AM The Fan Rochester as well as AHLTV.

Today’s win is Rochester’s first on the road this season after starting the campaign 0-3-0-0 away from The Blue Cross Arena … With Matt Bartkowski making his Amerks debut today, the Amerks have used 11 different defenseman through the first seven games this season, which is tied for most in the AHL (Cleveland) … Rochester improved to 18-7-1-0 record all-time versus the Rocket, which includes a 10-3-1-0 mark at Place Bell.