The Rochester Americans (0-2-0-0) closed out their preseason schedule on the wrong side of a 5-1 decision against the Utica Comets (1-1-0-0) Sunday at The Blue Cross Arena.

For the second straight game, the Amerks got on the scoreboard thanks in part to a power-play goal. The lone marker for Rochester came from veteran defenseman Ethan Prow as he was set-up by rookie forward Lukas Rousek in the second period.

Goaltenders Malcolm Subban and Michael Houser split the goaltending duties in the contest. Subban, who earned the start in-between the pipes, made 21 saves before Houser stopped seven of the eight shots he faced in 21 minutes of relief effort.

Utica, which opened its exhibition schedule Friday, was paced offensively by Reilly Walsh’s two-point effort with a goal and an assist. Michael Vukojevic, Nolan Foote, Nikita Okhotiuk and Graeme Clarke completed the scoring as they all added a goal each.

Netminder Akira Schmid made his preseason debut by making 14 saves to earn the win.

Utica opened the scoring with a pair of tallies 1:25 apart as Foote and Walsh each netted their first of the preseason at the 3:22 and 4:47 marks of the first period, respectively.

Later in the first period, the Comets added to their lead as Okhotiuk fired a long-range shot from the right point past a screened Subban with just under four minutes to play to make it a 3-0 game. 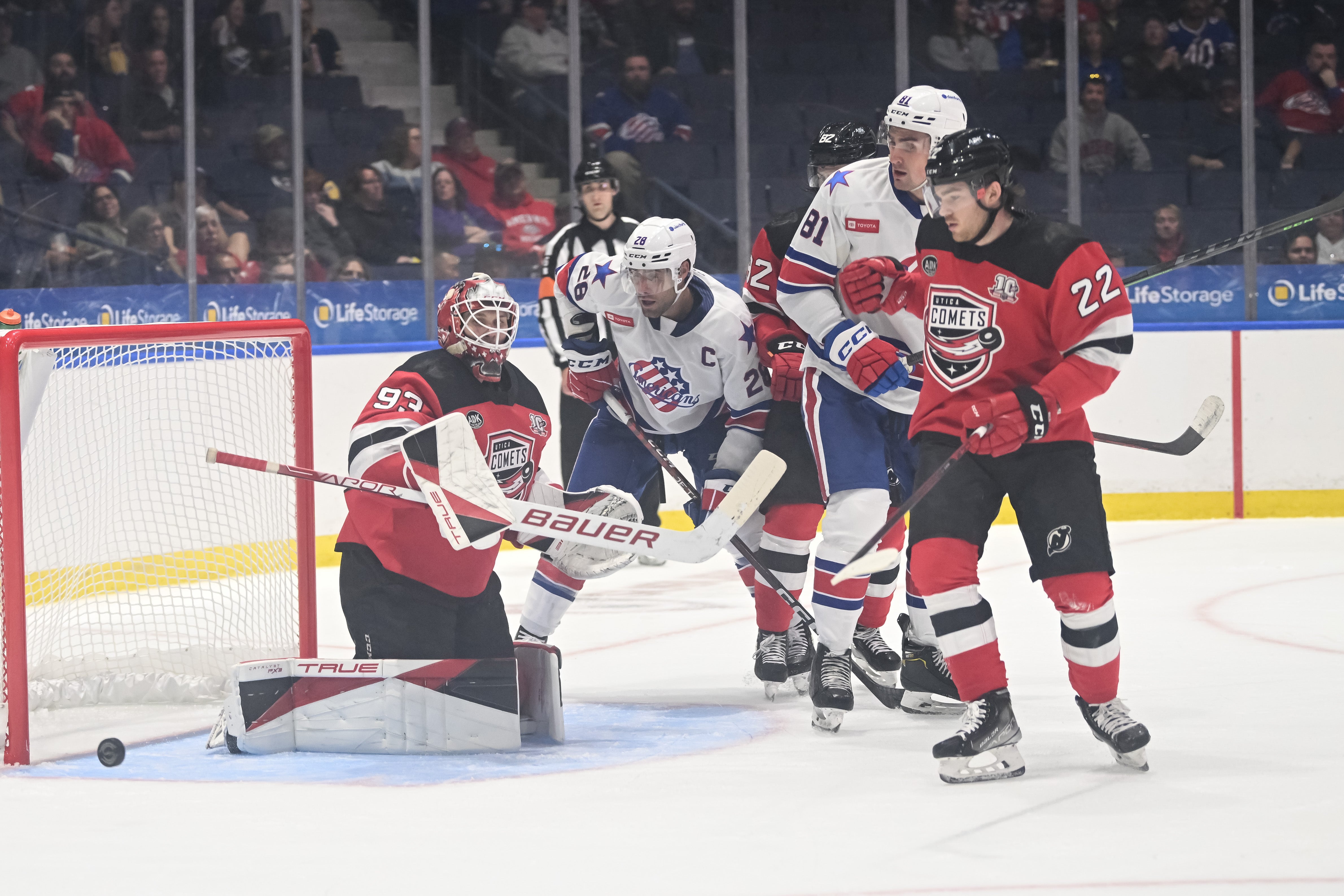 After being held without a shot in the initial 20 minutes of play, Rochester registered its first two of the contest in the opening minute of the second period but still could not find a way onto the scoreboard.

The Comets upped their cushion to four as Vukojevic redirected in Zach Senyshyn’s centering feed from the left wall as the duo skated in transition into the offensive zone with 13:56 left in the frame.

Later in the frame and trailing 4-0, forward Mason Jobst drew the Amerks first power-play of the night and the club needed five seconds before capitalizing.

Following the slash on Jobst, Rousek cleanly won the face-off to Schmid’s right directly back to Prow at the left point. The veteran defenseman stepped into the center of the blueline and wired a shot that glanced over Schmid and into the net with 2:16 left in the period.

Rochester faced a 4-1 deficit going into the final 20 minutes of regulation as well as being outshot 25-9.

Utica closed out the scoring as Clarke teamed up with Walsh and Stevens with 5:58 left to play to seal the 5-1 Utica win.

Rochester opens its 67th American Hockey League season – and 41st as the primary affiliate of the Buffalo Sabres – against the Toronto Marlies on Friday, Oct. 14 at The Blue Cross Arena. Amerks Season Ticket Memberships for the 2022-23 season are on sale now. Season Ticket Memberships start as low as $15 per game and come with a number of Members-only perks and benefits. Full Season, Half Season and Quarter Season Membership options are all available.  For more information on Amerks Season Tickets or to sign up today, visit www.amerks.com/memberships.