AMERKS FALL IN OVERTIME IN REMATCH WITH ROCKET

The Rochester Americans (32-26-6-3) scored three goals in the second period to take a 3-2 lead going into the final frame, but the Laval Rocket (33-23-3-2) countered back with a late goal in the final minutes of regulation before completing the comeback in overtime for a 4-3 win in Friday’s rematch between the two teams at Place Bell.

Despite the overtime loss, Rochester has earned points in nine of its last 12 overall but the club remains in sixth place in the North Division with nine games remaining in the 2021-22 regular season. The Amerks had won four of the previous five games in Laval while also boasting a 9-2-0-0 record over their last 11 visits to Place Bell dating back to the start of 2017-18 season.

Forward Arttu Ruotsalainen recorded a pair points as he scored his 18th goal of the campaign to go with an assist on Linus Weissbach’s goal in the second period. Ruotsalainen, the AHL’s reigning Player of the Month, has scored 10 goals and added 12 assists for 22 points in 17 games for Rochester since the start of March.

Sean Malone netted his fourth goal in the last three games and 12th point (8+4) over his previous nine to push his point streak to a career-high nine games dating back to Dec. 18. He also established a new personal-best with his 32nd point of the season in 30 games.

Defenseman Jimmy Schuldt picked up his 10th assist of the campaign on Malone’s 16th goal of the season while Jack Quinn also recorded a helper.

Goaltender Ukko-Pekka Luukkonen (11-12-5) made his 28th appearance of the season but was dealt the overtime loss despite making 40 saves. In 16 of his 28 appearances this season, Luukkonen has faced 30 or more shots, including each of his last four games.

Rafaël Harvey-Pinard (1+1), who had a career-high four points in Wednesday’s game, Sami Niku (1+1) and former Amerk Jean-Sébastien Dea (0+2) all booked a multi-point performance in the overtime win. Cedric Paquette scored his seventh goal in his eighth game of the season since joining the Rocket after beginning the year with the Montreal Canadiens while Danick Martel opened the scoring in the first period. 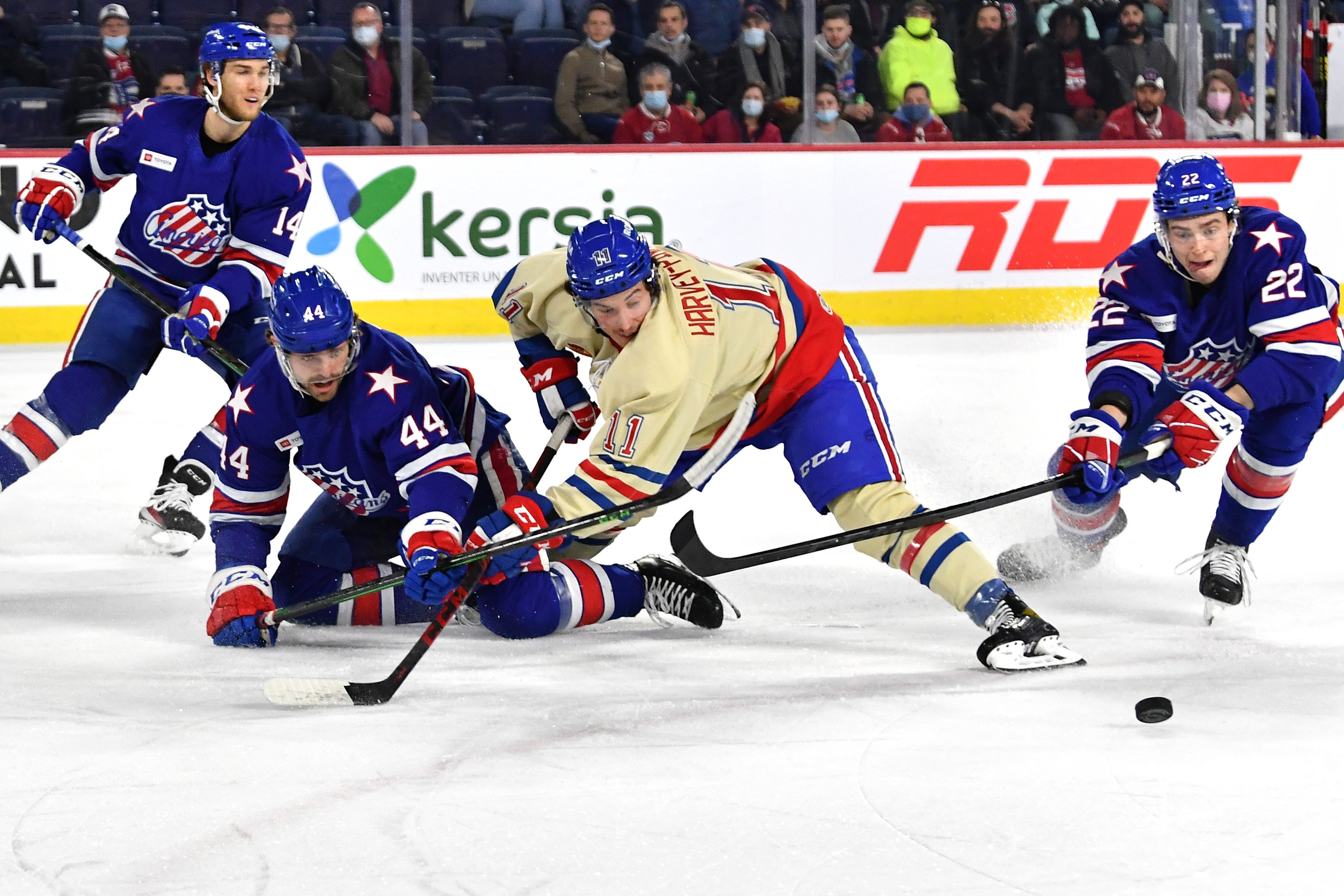 Rochester erased a 1-0 and 2-1 deficit in the second period to gain a 3-2 advantage going into the final period of play. The Rocket, however, tightened down defensively, limiting the Amerks just two shots in the third while registering 14 of the first 16 in the frame.

As the contest was nearing the final two minutes of regulation, Laval caught Rochester in a change as Dea and Harvey-Pinard carried the puck into the offensive zone before dropping a pass to Niku for a three-on-two odd-man rush. As the defenseman reached the puck atop the circle, he snapped it past the right leg of Luukkonen to even the score at three, forcing overtime. 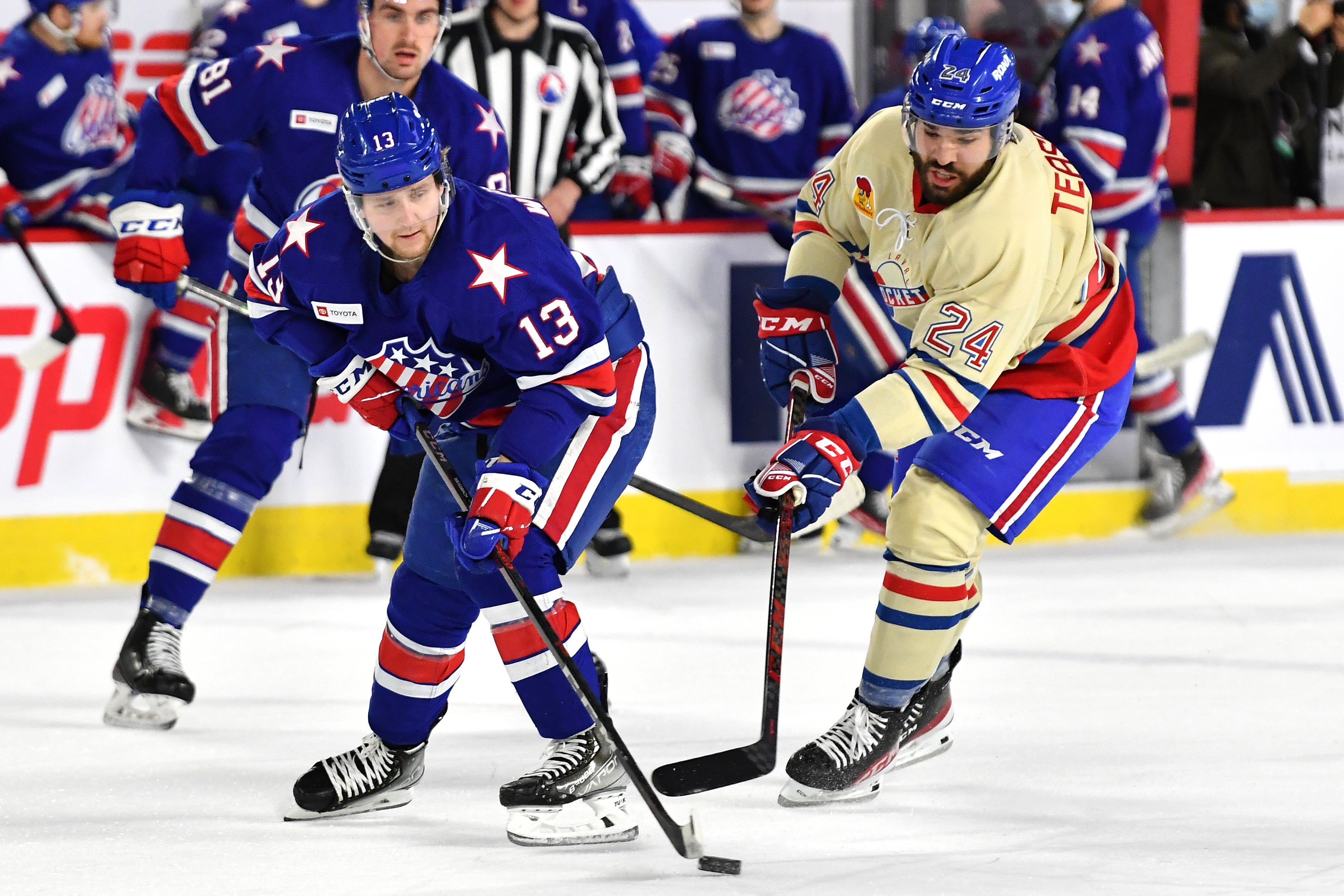 In the extra frame, neither team generated much offensively until the Laval trio of Dea, Harvey-Pinard and Niku used tic-tac-toe passing before Harvey-Pinard steered Niku’s centering pass inside the post to cap the 4-3 win.

Laval, who have now won four straight against the Amerks, opened the scoring as Martel swept in a loose rebound into the net while two Rochester skaters were in the penalty box for roughing and boarding, respectively.

The Amerks knotted the score 3:49 into the middle frame as Malone gathered a pass from Quinn and Schuldt. After the West Seneca native collected the puck, he tucked the puck inside the right post for his 16th goal of the season. While the Rocket answered right back 11 seconds later on the ensuing shift to take a 2-1 lead, Rochester scored a pair of goals on rebounds from Weissbach and Ruotsalainen, respectively, to take a one-goal cushion after 40 minutes of play.

Following the intermission break, Niku tied the game to force overtime before Harvey-Pinard sealed the win 3:58 into overtime.

The Amerks close out their five-game road-swing as they make their final trip of the season to CAA Arena to face the Belleville Senators on Saturday, April 9 at 7:00 p.m. All the action will be carried live on The Sports Leader 95.7FM/950 AM The Fan Rochester as well as AHLTV.