JJ Peterka’s fifth goal of the playoffs late in the opening frame gave the Rochester Americans (5-3) a 1-0 lead, but the Laval Rocket (4-2) exploded for six straight unanswered goals on their way to a 6-1 win in Game 1 of the North Division Finals Sunday at Place Bell.

The two teams, which combined for 70 shots and 42 penalty minutes, resume the best-of-five series on Monday, May 23 from Place Bell at 7:00 p.m.

Peterka provided Rochester’s lone tally from Sean Malone and Brett Murray, becoming the second Amerk to reach the 10-point mark in the postseason. The rookie forward has recorded at least one point in six of the eight playoff games while Murray (0+4) and Malone (2+3) have four and five points, respectively.

Arttu Ruotsalainen saw his AHL-best seven-game point-streak come to an end as he was held off the scoresheet despite registering two shots in the defeat.

Goaltender Aaron Dell (4+3) made his eighth straight start but was replaced by Michael Houser after he allowed four goals in the first 31 minutes of the game. Both Dell and Houser finished with 16 saves each.

Laval forward Danick Martel netted a franchise-record four goals to go along with a game-high 10 shots goal while Nate Schnarr (1+1) and Sami Niku (0+2) each turned in multi-point performances. Martel is the first AHL skater to notch four goals in a playoff game since Greg Scott of the Toronto Marlies did so against the Amerks on April 27, 2013.

Netminder Cayden Primeau, who entered the game with a 1.96 goals-against average and a .940 save percentage, stopped 31 of the 32 shots he faced. In four of his first five games in the postseason this year, Primeau has allowed two or fewer goals while earning four wins.

With less than five minutes remaining of a scoreless opening period and the Amerks holding a 13-7 shot-advantage, Murray swiped the puck to Malone inside the Rochester zone. Malone backhanded an outlet pass to Peterka near center ice to send the rookie forward one-on-one with a Rocket defenseman. As Peterka crossed Laval’s blueline, he quickly looped around the high slot before firing a well-placed, long-range shot over the blocker of Primeau to put Rochester ahead 1-0.

PETERKA NETS HIS FIFTH OF THE PLAYOFFS

The lead would be short-lived, however, as Martel answered less than two minutes later when he redirected Nate Schnarr’s right point for his first of back-to-back goals.

The teams combined for 26 shots in the first period but were only able to crack the scoreboard one goal apiece. 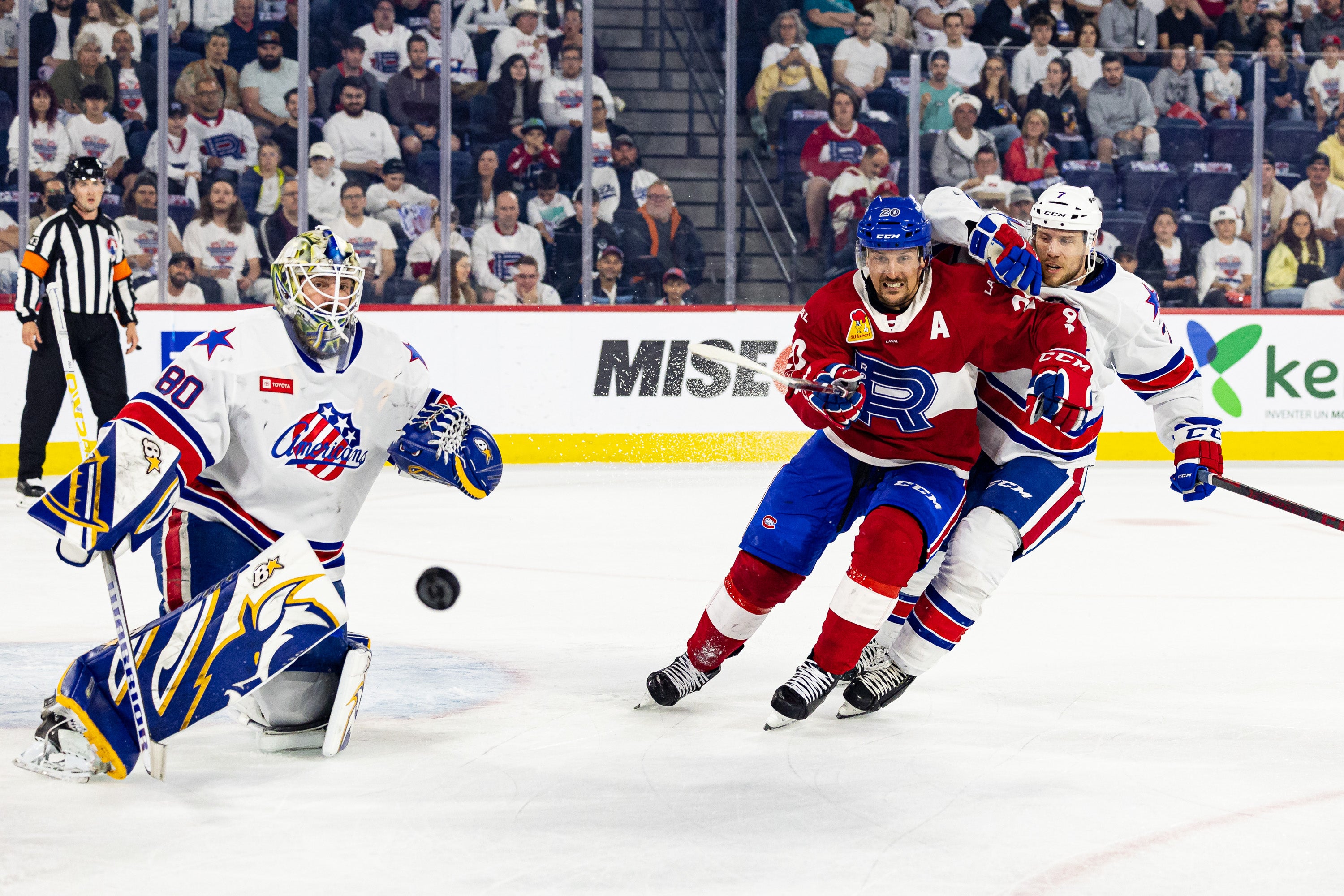 After tying the game in the last two minutes of the opening stanza, the Rocket grabbed their first lead of the contest as they tacked on a pair of tallies 3:14 apart to push the score to 3-1.

On the first goal of the period, Martel picked up his own rebound to the right of Dell, who thought he initially had the puck, and the forward slipped it inside the far post for his second of the night.

Shortly after making it a 2-1 score, Laval doubled its lead as Cedric Paquette and Rafael Harvey-Pinard finished off an odd-man rush with 11:34 left in the frame.

Rochester had a chance to stall some of the momentum from crowd as they drew a power-play 50 seconds after the Rocket goal, but the Amerks were unable to capitalize on the man-advantage.

Laval used the energy from the kill and added to it as Martel completed his hat trick after gathering a loose puck to the right of the Rochester net and whipping a shot past a sprawled Dell.

With Laval leading 4-1 entering the final period, Martel tacked on his fourth goal of the night seconds after the Rocket had a five-on-three two-man advantage for 17 seconds.

Schnarr closed out Laval’s six-goal run when he picked up his first of the playoffs at the 14:14 mark from Mattias Norlinder and Gabriel Bourque.

The teams reconvene on Monday, May 23 following a quick turnaround as Rochester looks to even series in Game 2 of the North Division Finals at Place Bell. Puck drop is slated for a 7:00 p.m. start and will be carried live on The Sports Leader 95.7 FM/950 AM The Fan Rochester as well as AHLTV.