Less than 24 hours after erasing a one-goal deficit and scoring four unanswered goals, the Rochester Americans (1-1-0-0) found themselves on the opposite side in Saturday’s rematch against the Toronto Marlies (1-1-0-0), who erupted for three third-third period goals, including twice on the man-advantage, to come away with a 3-1 win at Coca-Cola Coliseum.

Rookie forward Lukas Rousek notched his first goal of the young season from fellow first-year forward Filip Cederqvist and Mason Jobst midway through the opening period for Rochester while goaltender Ukko-Pekka Luukkonen made 37 saves in his second consecutive start. Dating back to the 2021-22 campaign, Luukkonen owns a 7-3-5 record in his last 15 starts.

Semyon Der-Arguchintsev produced a pair of assists for Toronto for his first two-point effort of the campaign. Nicholas Robertson opened the scoring for the Marlies in the third period before Alex Steeves and Adam Gaudette closed it with their second and first goals of the season, respectively.

In his season debut, goaltender Keith Petruzzelli stopped 25 of the 26 shots he faced, which included 13 over the final 40 minutes of regulation to earn victory.

Facing a 1-0 deficit entering the third period, the Marlies made use of two straight Amerks tripping infractions to grab a 2-1 lead with 8:03 left in the stanza.

Both power-play goals were nearly identical as Der-Arguchintsev had the puck atop the left point and fired a cross-ice pass towards Robertson, and then Steeves, who were inside the left circle of Luukkonen.

As the clock was dwindling down, Rochester pulled its netminder for an extra-attacker for the final 2:25. Despite several attempts by the Amerks as well as three straight icings by the Marlies, Gaudette ultimately sealed the contest as he scored into the vacant net.

In the first period, even though the Amerks did not capitalize on their first power-play of the contest, the club got on the board first thanks to Rousek’s goal at the 9:45 mark. 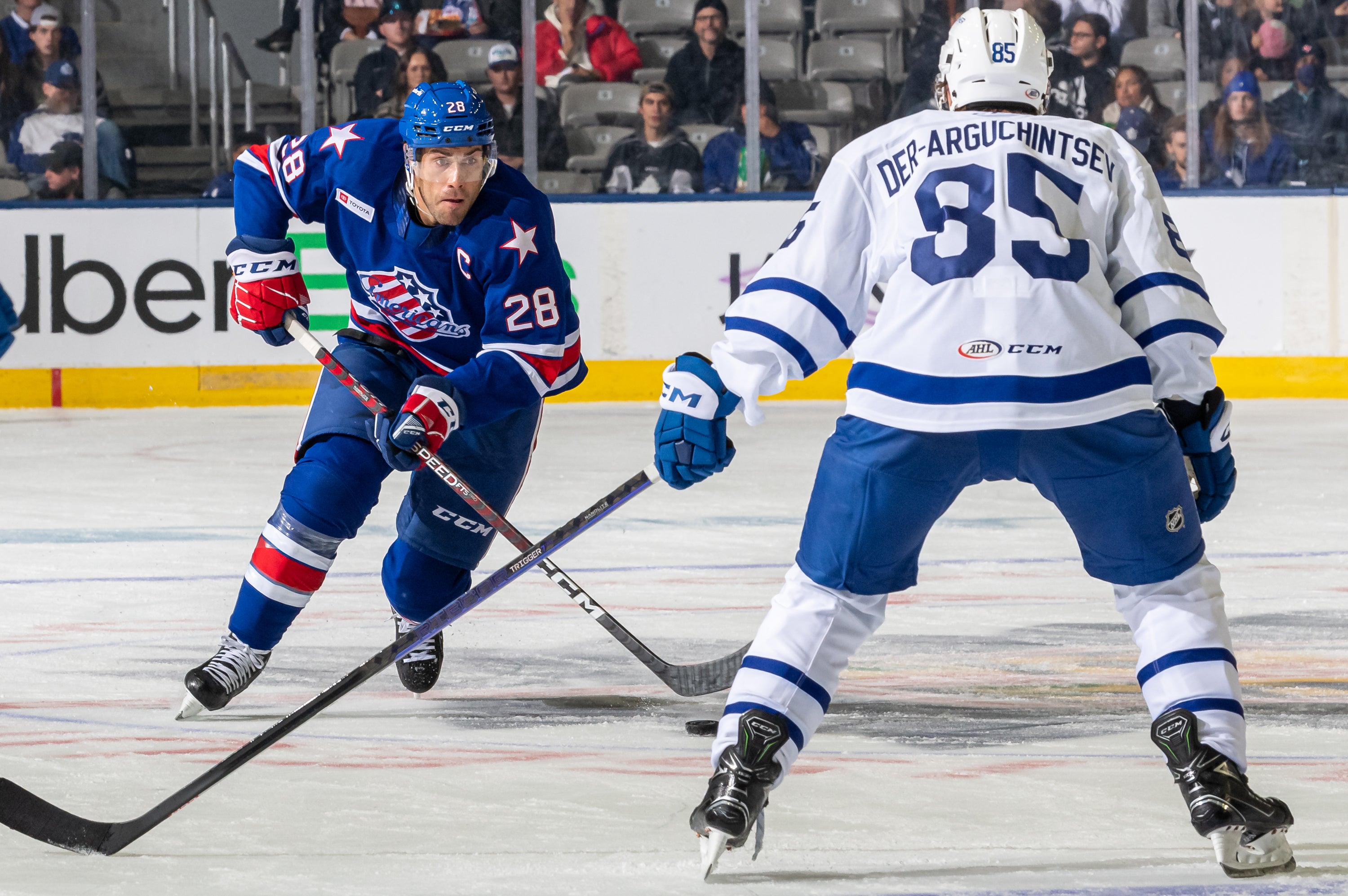 The rookie forward posted up in-between the face-off circles and buried a shot from Cederqvist, who was stationed behind the Toronto net. Prior to providing a centering feed to Rousek, Cederqvist dumped the puck into the zone before picking it up from Jobst.

Rousek’s tally gives him a pair of points (1+1) through the first two games of the season, and dating back to the 2021-22 regular season, he has four points (2+2) over his last five outings. Cederqvist, meanwhile, recorded his first career AHL point.

Rochester carried the one-goal lead into the third period as both Luukkonen and Petruzzelli combined to stop all 18 shots they faced in the middle frame but Toronto countered with three straight goals to come away with a 3-1 win.

The Amerks return to The Blue Cross Arena on Wednesday, Oct. 19 to host the Belleville Senators in the first meeting between the two teams since Rochester completed a two-game sweep in the North Division play-in series this past spring. Wednesday’s matchup will be the first of eight encounters this season and will be carried live on 95.7 FM/950 AM The Fan Rochester as well as AHLTV. 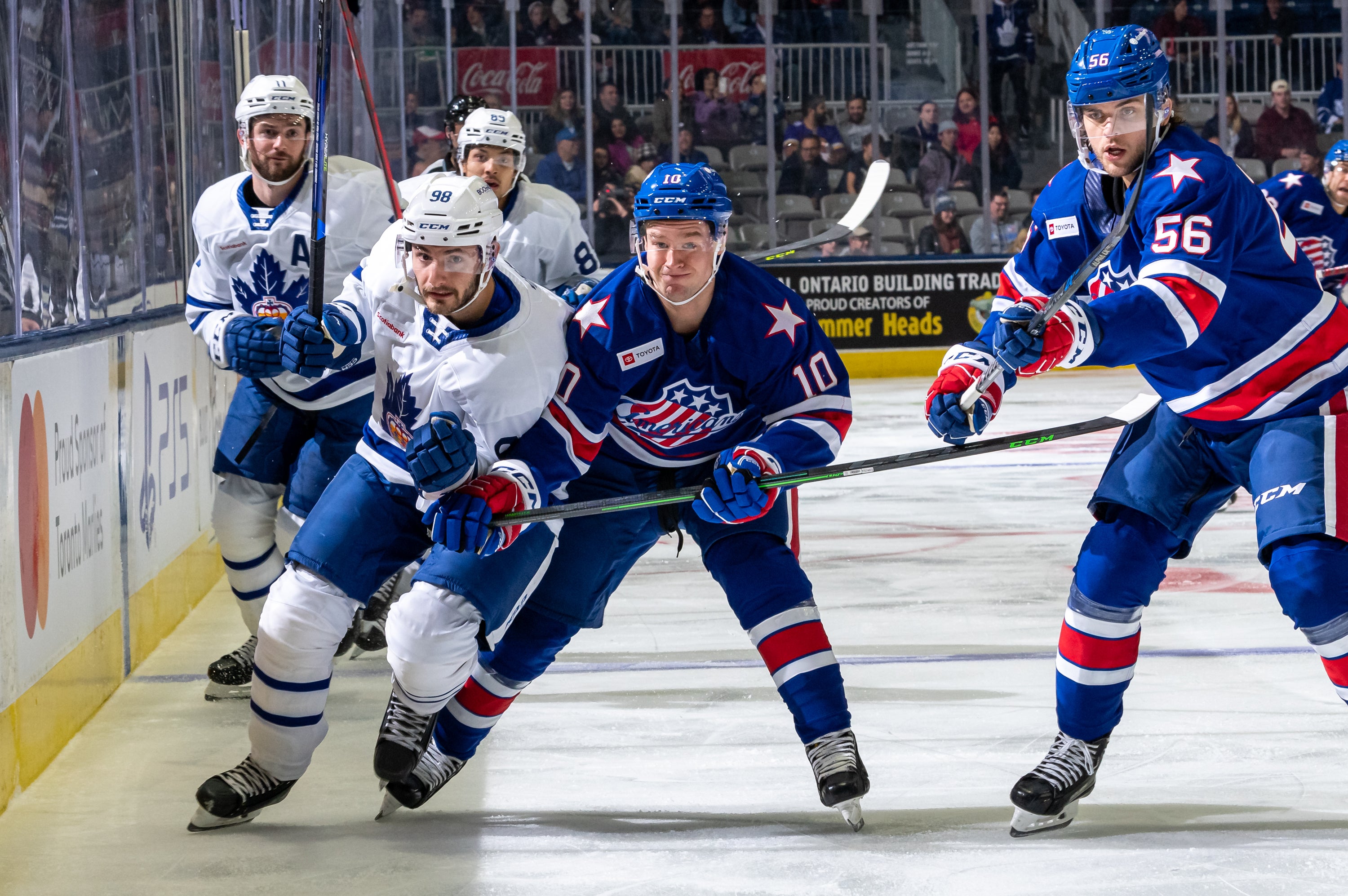 This weekend’s home-and-home series with the Marlies was the first time the Amerks opened the season with back-to-back games against a Canadian-based opponent since splitting a two-game set with the Cape Breton Oilers on Oct. 6 and 7 to begin the 1995-96 campaign … In 22 of the last 30 meetings between the two teams dating back to the 2016-17 season, the team that scored first has gone on to come away with the victory, however, both Rochester and Toronto is 0-1 in that regard this season after this weekend.