The Rochester Americans (33-26-6-3) scored four power-play goals while JJ Peterka (2+2) produced a season-high four points (2+2) to help the Amerks cruise to a 6-2 victory over the Belleville Senators (33-26-4-0) Saturday at CAA Arena in the final game of a five-game road swing.

With the win, Rochester has earned points in 10 of its last 13 games overall, but the club remains in sixth place in the North Division with .551 winning percentage. The Amerks improved to 8-2-3-0 record in their 13 matchups against the Senators north of the border while they have scored two or more goals in 22 of the previous 25 get-togethers, which includes 15 games where they have produced four or more tallies.

Jack Quinn (2+1) earned his 16th multi-point effort of campaign as he tallied a pair of power-play markers to go with an assist. The Amerks are 14-1-1-0 when Quinn produces at least two points and show a 13-3-0-0 record when Peterka has more than one point. Rochester is also a perfect 7-0-0-0 this season when the duo record multi-point outings in the same contest.

Michael Mersch (0+2) recorded a pair of assists while Jimmy Schuldt and Mitch Eliot both scored for the Amerks. Oskari Laaksonen, Lukas Rousek, Sean Malone, Arttu Ruotsalainen and Brett Murray all recorded an assist.

Goaltender Aaron Dell (12-6-1) made his 20th appearance of the season and earned the win as he made 30 saves. In 17 of his 20 appearances this season, Dell has faced 30 or more shots, including eight straight and 10 of his last 11 appearances. 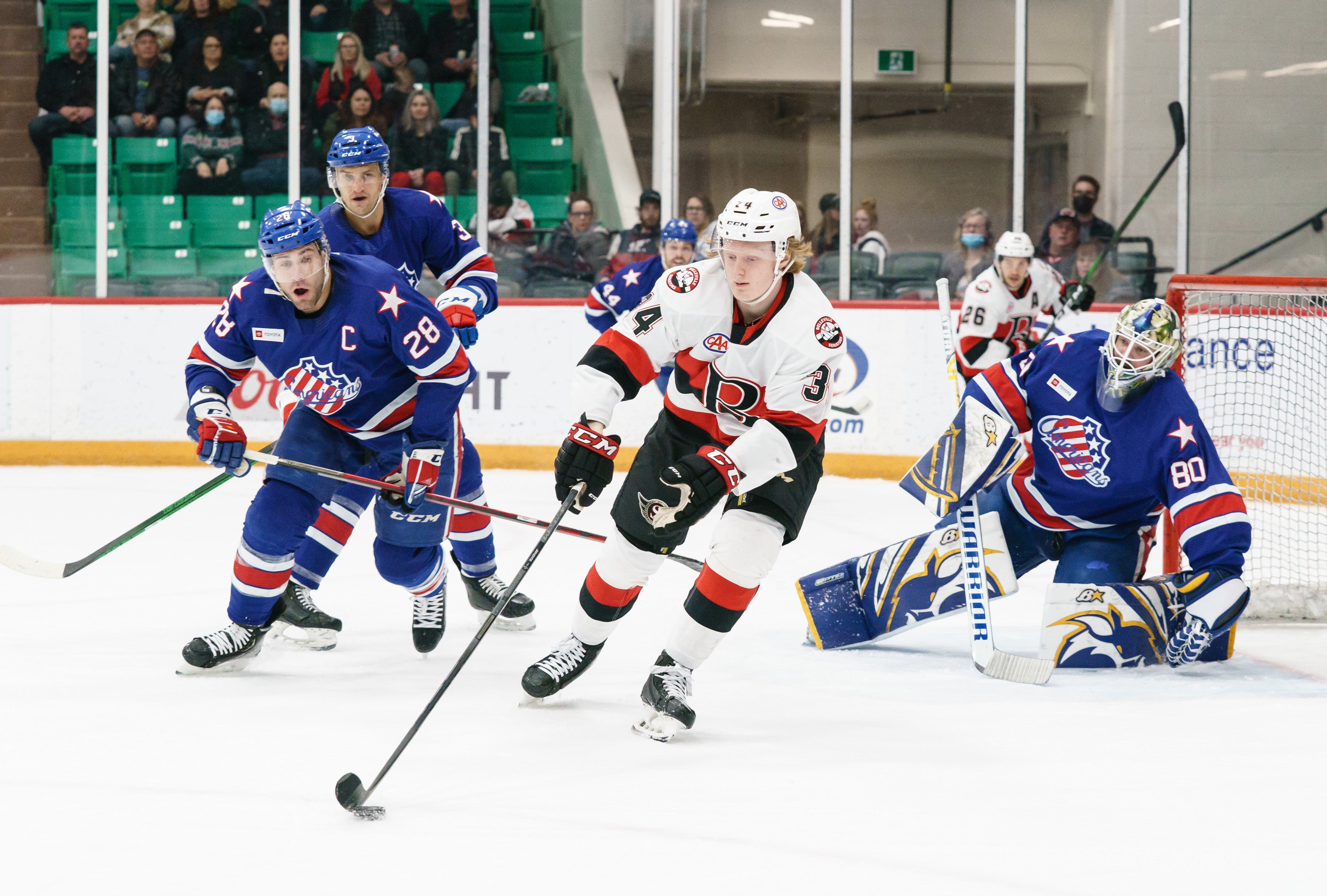 Lassi Thompson (1+1) and Cole Reinhardt (1+0) both scored for Belleville, who currently are tied for fourth in the division with a .556 points percentage. Filip Gustavsson (7-5-1) started in the crease but after allowing four goals was replaced by Michael McNiven (4-4-2) 4:08 into the second period. McNiven made 12 saves in 36 minutes of relief.

With a pair of first-period goals from Eliot and Quinn, the Amerks took a 2-0 lead into the intermission break.

In the middle frame, Rochester doubled its lead to 4-0 just 4:08 into the period as Quinn and Schuldt tallied goals 66 seconds apart. 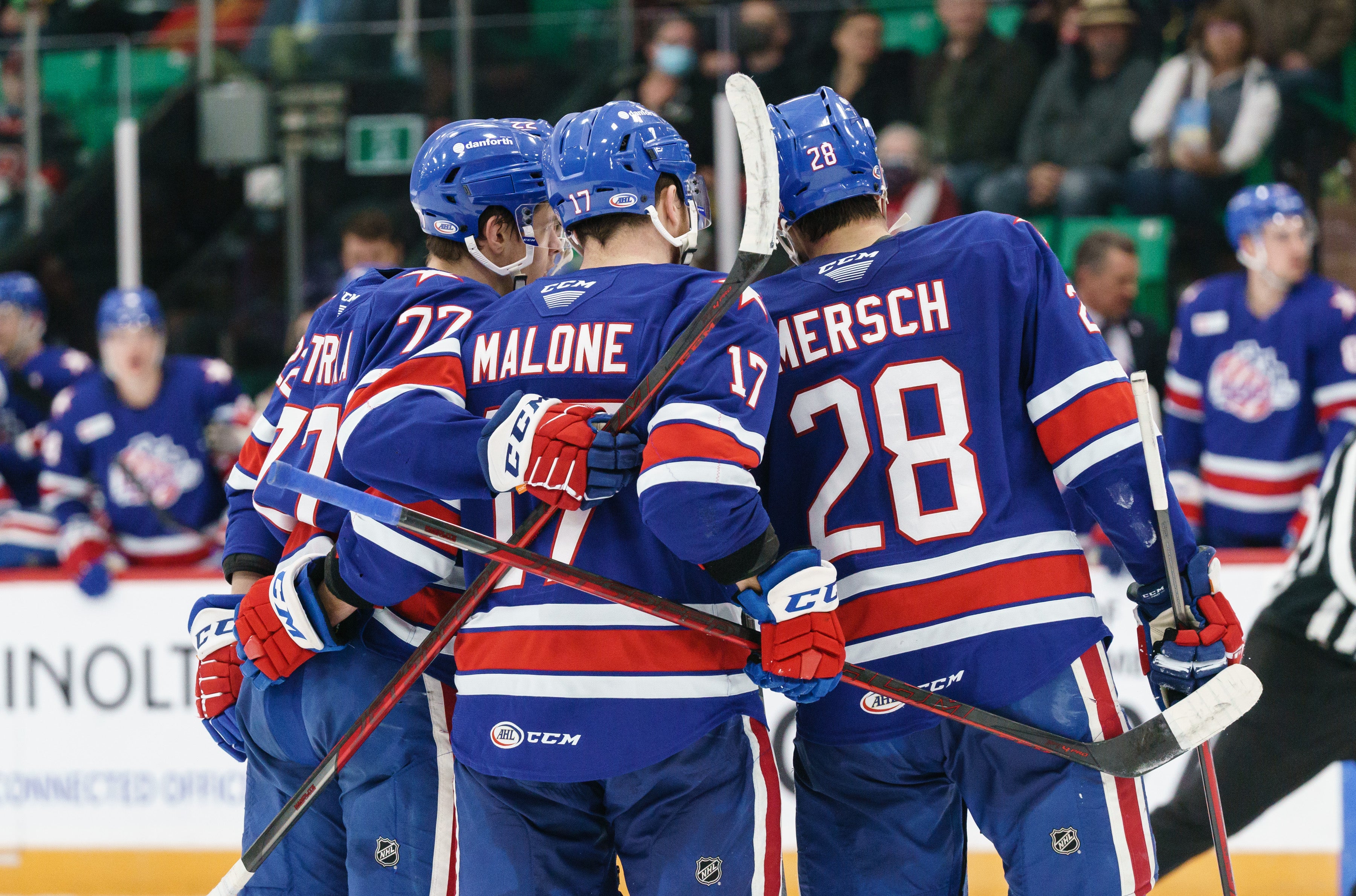 Following Schuldt’s fifth goal of the season, Gustavsson was replaced by McNiven. The Senators gathered some energy as Thompson chipped into the score to make it a three-goal game.

Rochester did not flinch, however, as Peterka scored two more power-play tallies 53 seconds apart to restore the 6-1 score.

With the secondary assist on Peterka’s second goal, Malone, who was playing in his 200th game as an Amerk, extended his point streak to a career-high 10 games dating back to Dec. 18. During his streak, which is the longest this season by an Amerk, Malone has recorded 13 points (8+5). 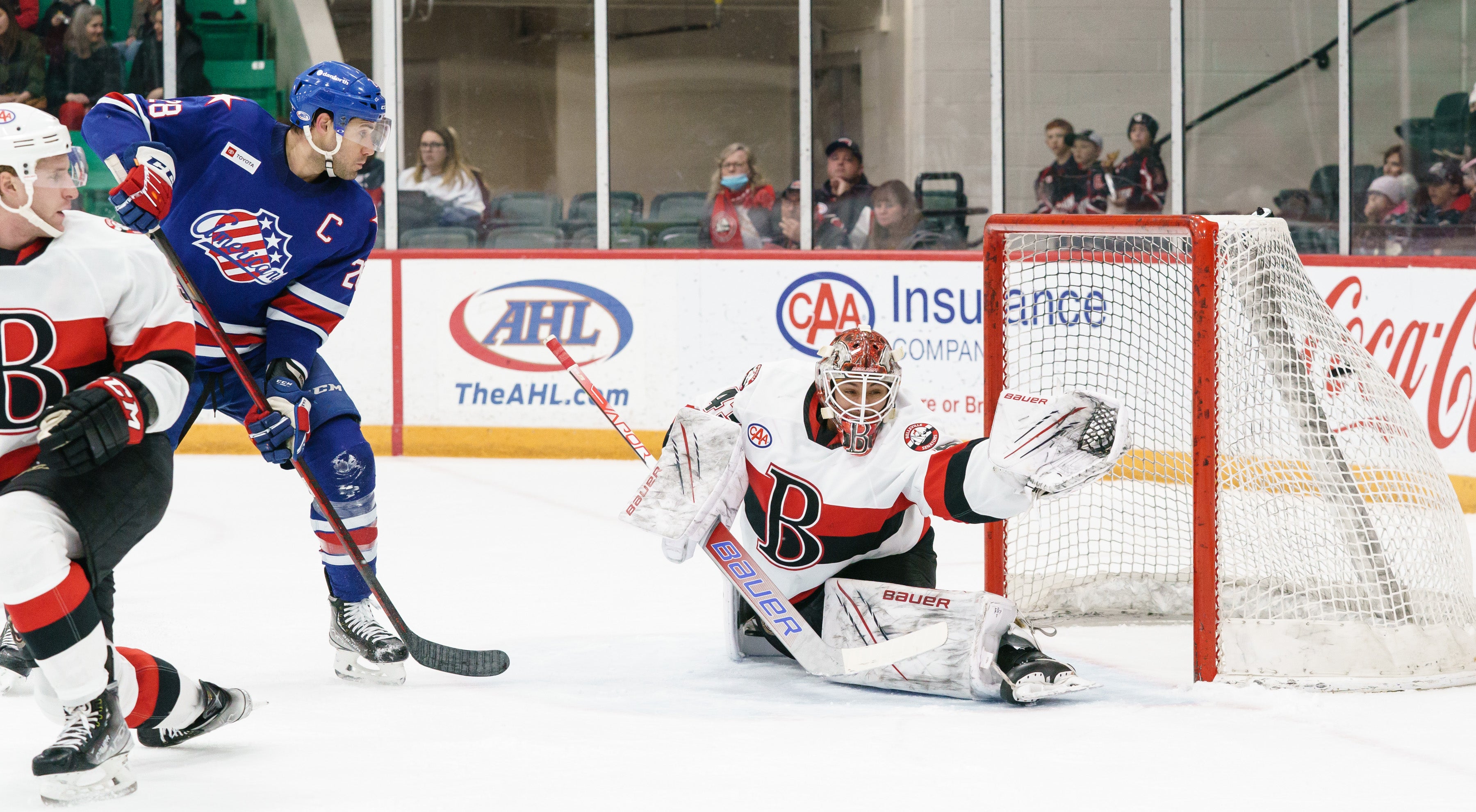 Reinhardt added his 12th goal of the season 5:46 into the final period of regulation to complete the scoring as Rochester earned the 6-2 victory.

The Amerks kickoff a four-game homestand beginning on Wednesday, April 13 as they welcome the Laval Rocket to The Blue Cross Arena for a 7:05 matchup. All the action will be carried live on The Sports Leader 95.7FM/950 AM The Fan Rochester as well as AHLTV.