The Rochester Americans announced today their schedule for the 2022-23 American Hockey League regular season, presented exclusively by Seneca Niagara Resort & Casino. The Amerks will open their 67th AHL season – and 41st as the primary affiliate of the Buffalo Sabres – on Friday, Oct. 14 at 7:05 p.m. against the Toronto Marlies at The Blue Cross Arena.

All 32 AHL teams will play a 72-game regular-season schedule (36 home games and 36 away games) this coming season with the Amerks playing against 14 other teams. Rochester, which embarks on its third season under head coach Seth Appert, will play 24 of its 36 home games on weekends, with 17 Friday home games, four Saturday home dates and three Sunday home outings. The team will play the balance of its schedule with 12 midweek games on Wednesday nights, including a pre-Thanksgiving Day matchup on Wednesday, Nov. 23 when the Providence Bruins make their lone visit of the season and on Wednesday, Dec. 28 when the team returns from the annual Christmas break.

For the seventh straight year, the Amerks will play all 72 of their games solely against Eastern Conference opponents this season, with 54 coming against their North Division rivals and 18 versus teams from the Atlantic Division. The Amerks will again remain in the North Division of the Eastern Conference along with the Belleville Senators, Cleveland Monsters, Laval Rocket, Syracuse Crunch, Toronto Marlies and Utica Comets, who enter their second season as the primary affiliate of the NHL’s New Jersey Devils following eight years as the top development club of the Vancouver Canucks.

As in years past, Rochester will face Syracuse more than any other team during its 67th AHL campaign with a dozen meetings (six home, six road) against its longtime intrastate rival. The Amerks will also have 10 matchups (five home, five road) against Utica as well as eight each (four home, four road) against Belleville, Cleveland, Toronto and Laval to round out their Divisional schedule. 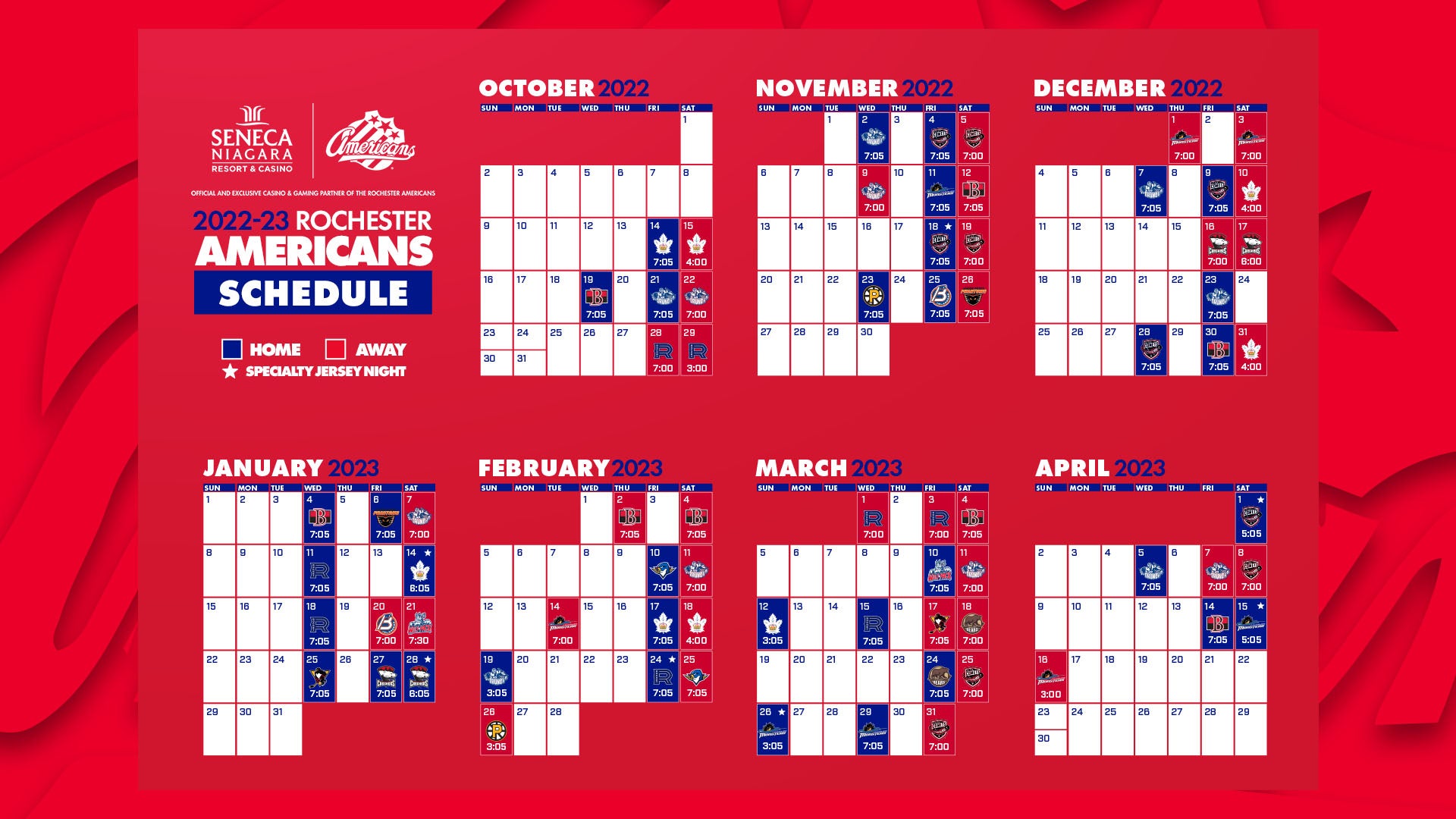 The Amerks will again play the entire Atlantic Division this coming season with four matchups (two home, two road) against the Charlotte Checkers. The Checkers make their only appearance in Rochester on back-to-back nights to close out the month of January after hosting the Amerks for a two-game set in mid-December.

Similar to last season, the Amerks will also face the Providence Bruins and Wilkes-Barre/Scranton Penguins twice (one home, one road), while also seeing the Bridgeport Islanders, Hartford Wolf Pack, Hershey Bears, Lehigh Valley Phantoms and defending Eastern Conference champion Springfield Thunderbirds for a pair of meetings (one home, one road) as well. The Bears make their only visit to Rochester on Friday, March 24 for what will be the 464th all-time meeting and the second half of a home-and-home series between the AHL’s two oldest franchises.

All home games will start at 7:05 p.m. this season except for the four Saturday matchups that are slated for either 6:05 p.m. or 5:05 p.m. starts. Rochester’s three Sunday afternoon will begin at 3:05 p.m.

The Amerks’ busiest month of the season comes in the second half of the year with 14 games in March. After opening the month on the road, Rochester will play six of its next 11 games at home split between North Division and Atlantic Division opponents.

The Amerks’ longest homestand of the season is a three-game stretch, which occurs on three separate occasions over the course of the season and twice in January. Rochester remains home for three straight before and after the Christmas break between Dec. 23 and 30 prior to a New Year’s Eve matinee north of the border in Toronto. The team is then home again for three in a row from Jan. 11 to Jan. 18 and then again from Jan. 25 to Jan. 28, culminating with back-to-back matchups against Charlotte. The Amerks’ longest string of road games is a five-game trek from Feb. 25 to March 4 that begins in Springfield and ends in Belleville. 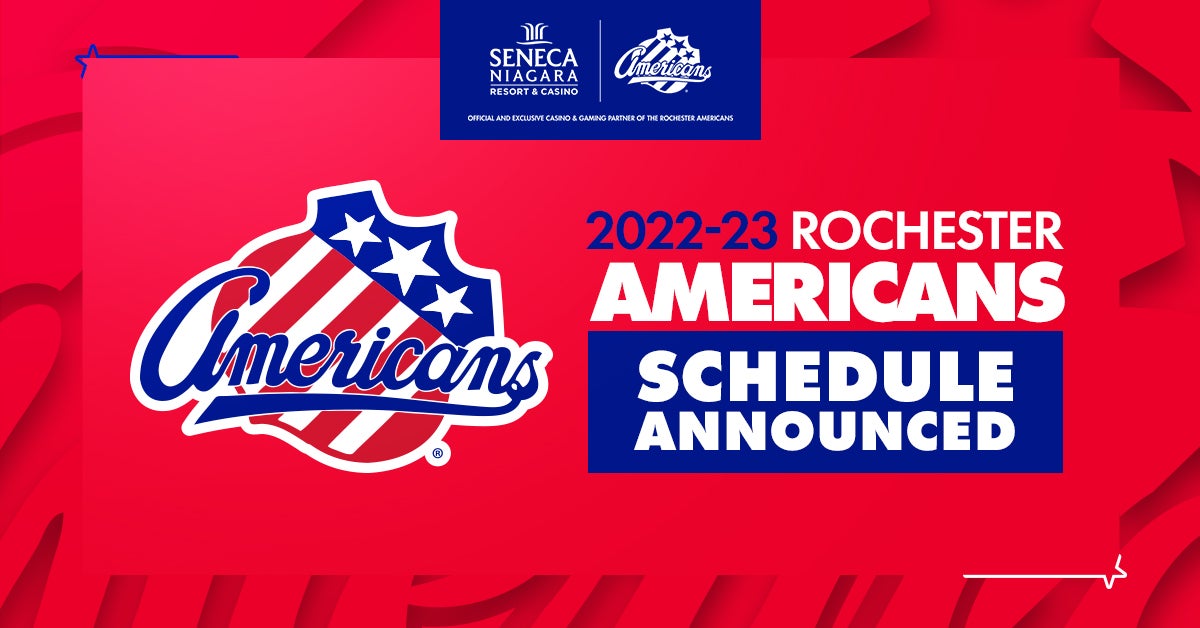 Rochester spends the most time on home ice in January with eight games within the friendly confines of The Blue Cross Arena. The Amerks begin and end the month of January at home, during which a pair of three-game homestands bookend a weekend trip to New England. Conversely, March has the Amerks playing the most road games in any month with eight.

Rochester has four “three-in-three” situations on the docket, the same from last season. The Amerks will be in action three straight nights once in February, twice in March and another in the final weekend to close out the 2022-23 regular season.

Information on promotional and annual theme nights will be announced at a later date.