The Rochester Americans announced today their schedule for the 2021-22 American Hockey League regular season, presented exclusively by Seneca Niagara Resort & Casino. The Amerks will open their 66th AHL season – and 40th as the primary affiliate of the Buffalo Sabres – on Sunday, Oct. 17 at 3:00 p.m. against the Utica Comets at the Adirondack Bank Center.

It marks the first time since the 2011-12 campaign that the Amerks are scheduled to open the season on the road and just the fourth time in the 65-year history of the franchise Rochester begins play on a Sunday, the last being Oct. 12, 1969 to kick-off the 1969-70 season.

The Amerks return to a full 76-game schedule (38 home games and 38 away games) this coming season and will play against 14 of the AHL’s 31 teams. Rochester, which embarks on its second season under head coach Seth Appert, will play 23 of its 38 home games on weekends, with 14 Friday home games, seven Saturday home dates and a pair of Sunday home outings. The team will play the balance of its schedule with 15 midweek games, including 14 on Wednesday nights and one on Monday, Dec. 27 against Utica in its first game back from the annual Christmas break.

For the sixth straight year, the Amerks will play all 76 of their games solely against Eastern Conference opponents this season, with 56 coming against their North Division rivals and 20 versus teams from the Atlantic Division. The Amerks will again remain in the North Division of the Eastern Conference along with the Belleville Senators, Cleveland Monsters, Laval Rocket, Syracuse Crunch, Toronto Marlies and Utica Comets, who begin their first season as the primary affiliate of the NHL’s New Jersey Devils following eight years as the top development club of the Vancouver Canucks.

Rochester will face Syracuse and Utica more than any other team during its 66th AHL campaign with a dozen meetings (six home, six road) against each of its regional rivals. The Amerks will have 10 matchups (five home, five road) against Cleveland, which returns to North Division after spending all of last season in the Central. Rochester’s remaining Divisional matchups also include eight each (four home, four road) against Belleville and Laval, and a total of six meetings (three home, three road) with Toronto. 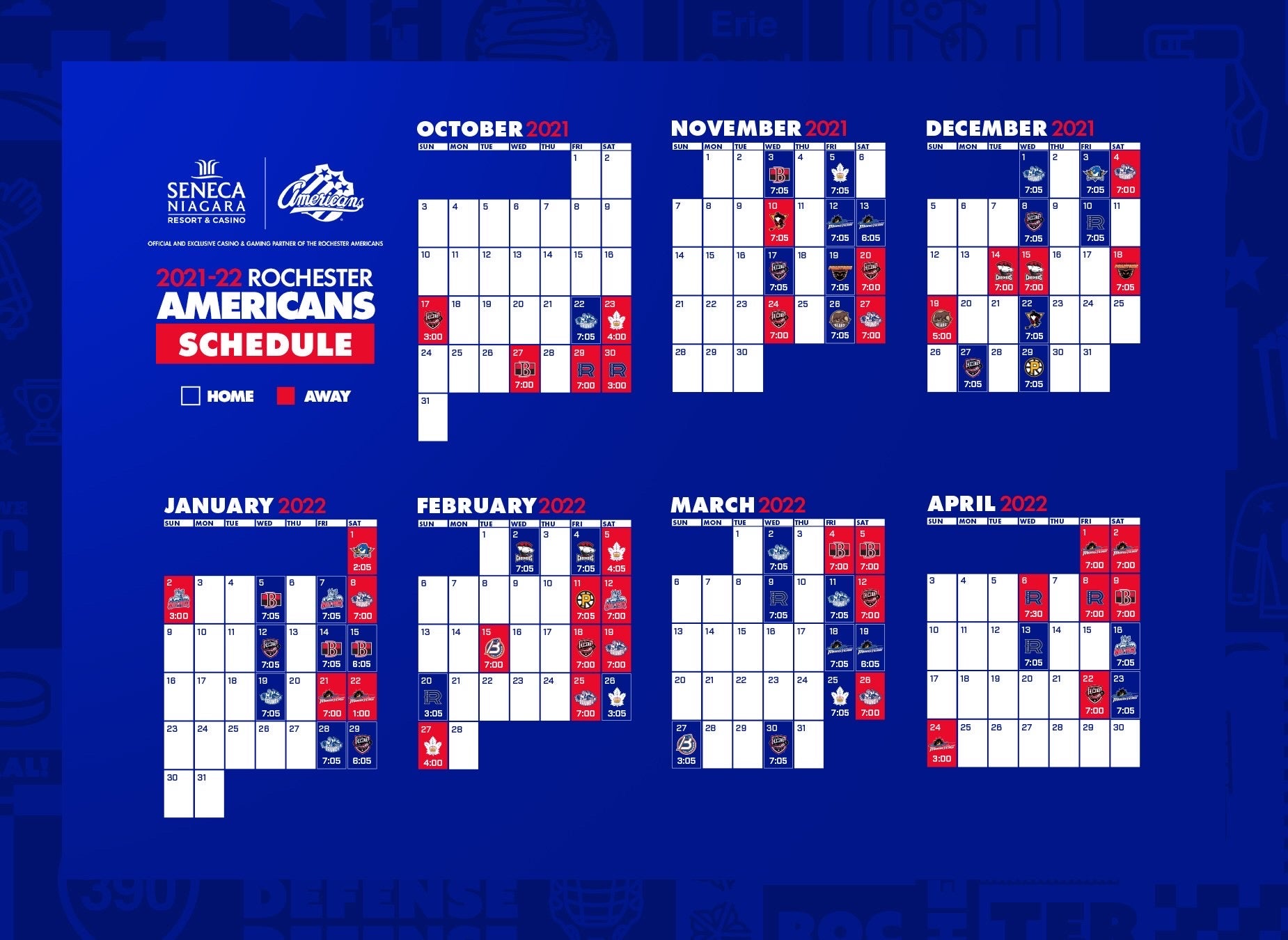 The Amerks will again play the entire Atlantic Division this coming season with four matchups (two home, two road) each against the defending Calder Cup champion Charlotte Checkers, who enter the season under a new affiliation with the Florida Panthers, and Hartford Wolf Pack. The Checkers make their only appearance in Rochester on back-to-back nights to begin the month of February, while the Wolf Pack make separate visits twice following the New Year.

Similar to the 2019-20 season, the Amerks will also face the Providence Bruins and Wilkes-Barre/Scranton Penguins twice (one home, one road), while also seeing the newly named Bridgeport Islanders, Hershey Bears, Lehigh Valley Phantoms and Springfield Thunderbirds for a pair of meetings (one home, one road) as well. The Bears make their only visit to Rochester on Friday, Nov. 26 the day after Thanksgiving for what will be the 460th all-time meeting between the AHL’s two oldest franchises.

All home games will start at 7:05 p.m. this season except for five Saturday matchups that are slated for either 3:05 p.m. or 6:05 p.m. starts. Rochester’s two Sunday contests, scheduled for Feb. 20 against Laval and Mar. 27 against Bridgeport, respectively, will also begin at 3:05 p.m.

The Amerks’ busiest month of the season comes right after the New Year with 13 games in January. After ringing in the 2022 calendar year with back-to-back games in New England, including a 2:05 p.m. matinee in Springfield on New Year’s Day, Rochester will play eight of its next 11 games at home.

The Amerks’ longest homestand of the season is a four-game stretch, which occurs on three separate occasions over the course of the season and twice in January. Rochester remains home for four straight between Nov. 12 and Nov. 19, highlighted by a set against Cleveland over a three-night span. The team is then home again for four straight from Jan. 12 to Jan. 19 and then again from Jan. 28 to Feb. 4, culminating with back-to-back matchups with Charlotte. The Amerks’ longest string of road games is a six-game trek from Feb. 5 to Feb. 19 that begins in Toronto and ends in Syracuse with another trip out to New England in between. 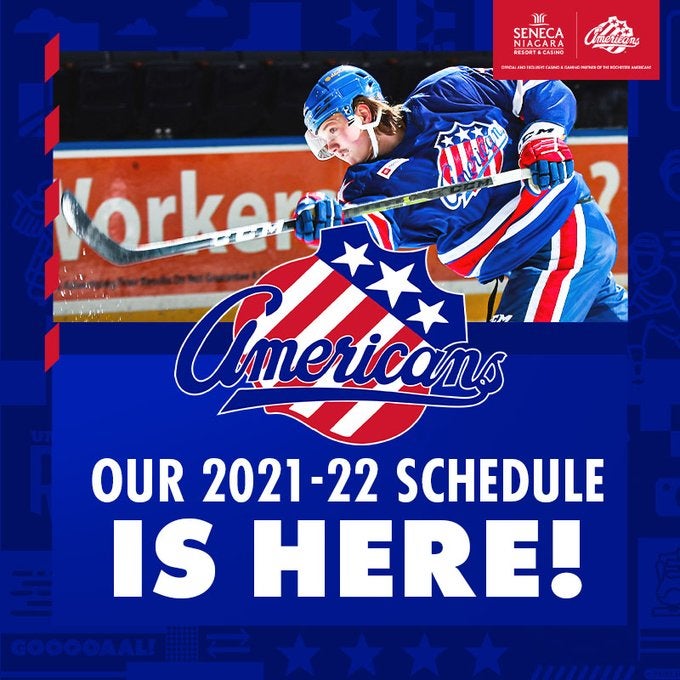 Rochester spends the most time on home ice in January and March with eight games each within the friendly confines of The Blue Cross Arena. The month of January sees the Amerks play eight home games between Jan. 12 and Feb. 4, a three-week stretch that includes a pair of four-game homestands. The Amerks begin and end the month of March at home, during which all but one game will be played against North Division opponents. Conversely, February has the Amerks playing the most road games in any month with eight, including two trips to Toronto and Syracuse in that time.

The Amerks open the season by playing five of their six games in October on the road with their only home matchup being the Home Opener scheduled for Friday, Oct. 22 against Syracuse. Rochester then embarks on a four-game trek north of the border, including a back-to-back set in Laval to conclude the month. All six games in October are against North Division opponents.

Rochester has four “three-in-three” situations on the docket, up from two from the 2019-20 season. The Amerks will be in action three straight nights twice in February, once again in March and another in the final weekend to close out the regular season.

Information on promotional and annual theme nights will be announced at a later date.

The Amerks new Can’t Wait List is still available to sign up for a limited time.  The Can’t Wait List give fans the opportunity to receive preferred pricing and seating ahead of the 2021-22 season when single-game tickets go on sale. Five winners will be selected at random for the chance to win a four-pack of tickets to the Home Opener while one lucky grand prize-winner will receive four complimentary season tickets for the upcoming 2021-22 season. To sign-up or to learn more about the Amerks’ free, no-obligation Can’t Wait List, fans can visit www.amerks.com/cantwait.