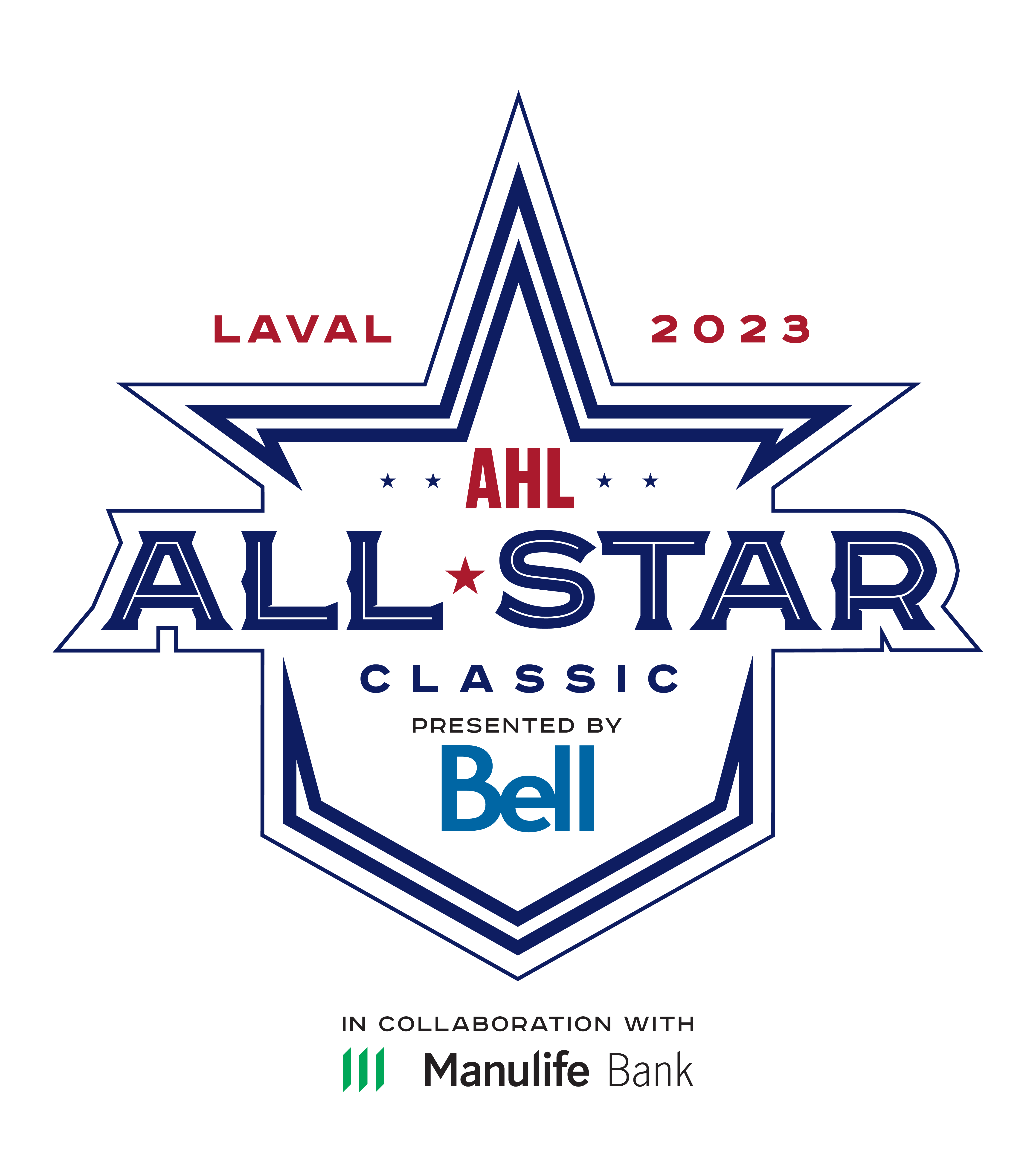 The American Hockey League announced today that Rochester Americans forward Brandon Biro has been named to the North Division All-Star roster for the 2023 AHL All-Star Classic presented by Bell in collaboration with Manulife Bank. The annual event will take place Feb. 5-6 at Place Bell in Laval, Quebec, home of the Laval Rocket.

Despite missing six games due to injury, Biro has blazed his way atop the team's scoring lead following a productive December in which he led the team with 16 points (6+10) in 10 games. He recorded multi-point efforts in seven of his 10 appearances, including six straight between Dec. 9 and Dec. 30 before closing out the month with an assist in the 3-2 win in Toronto.

He currently paces the Amerks in assists (20) and points (29) through 25 games and his recent seven-game point streak to close out the 2022 calendar year was the longest of his career. He ranks fourth on the team with nine goals and needs only three to match his career-high of 12 from last season.

Dating back to last season, the Sherwood Park, Alberta, native has totaled 70 points on 21 goals and 49 assists over his last 73 games and hasn't gone more than two games without a point since Nov. 27, 2021. Since the start of the 2022 calendar year, Biro has posted 19 multi-point outings in 53 games, totaling 58 points on 18 goals and 40 assists.

The 5-foot-11, 170-pound forward has amassed 75 points (23+52) in 88 career games with Rochester since joining the Amerks prior to the 2020-21 campaign after originally signing a two-year deal with Buffalo Sabres as an undrafted free agent on March 18, 2020. He also appeared in one game with the Buffalo Sabres, making his NHL debut against Montreal on Feb. 23, 2022. 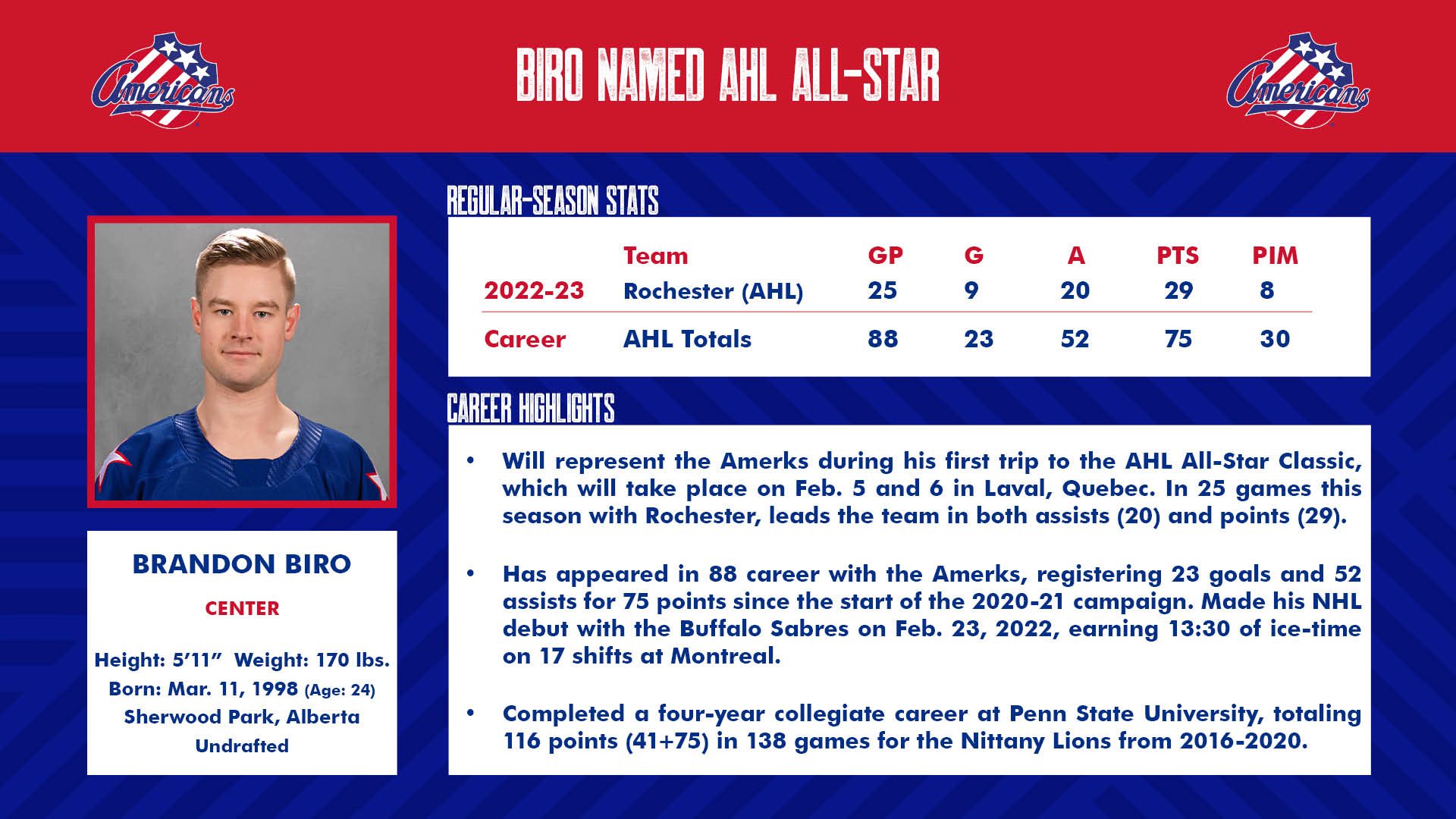 The two-day event begins on Sunday, Feb. 5 with the 2023 Rona AHL All-Star Skills Competition at 7:00 p.m. In keeping with its traditional format, the All-Stars from the two Eastern Conference divisions will be squaring off against the All-Stars from the two Western Conference divisions in seven skills events, including hardest shot, fastest skater and accuracy shooting.

The 2023 Mise-o-jeu AHL All-Star Challenge will then take place the evening of Monday, Feb. 6 at 7:00 p.m. For the sixth straight year, instead of a traditional 60-minute game, the league’s all-stars will be divided into four teams, one representing each of the league’s divisions (Atlantic, North, Central, Pacific). The teams will then play a round-robin tournament featuring six games of 10 minutes each played entirely at 3-on-3. The two teams with the best records at the end of the round-robin tournament will face-off for the championship, a six-minute game also played using the 3-on-3 format. Rosters for each team will be composed of 11 skaters and two goaltenders.

Tickets for the 2023 AHL All-Star Classic presented by Bell in collaboration with Manulife Bank, which include admission to both the 2023 Rona AHL All-Star Skills Competition on Sunday, Feb. 5, and the 2023 Mise-o-jeu AHL All-Star Challenge on Monday, Feb. 6, start at only $39 and are available now by visiting rocketlaval.com.