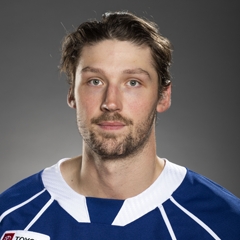 LAST SEASON
2019-20: Completed his senior season at the University of Nebraska-Omaha (NCHC) with a career-high two goals and 11 points in 36 games with the Mavericks ... Ranked among the team’s top three scoring defensemen for the third straight year while serving as an assistant captain ... Named an AHCA All-American Scholar and earned a fourth straight selection to the NCHC Academic All-Conference Team ... Played in his 100th consecutive game at Minnesota Duluth on 2/08 ... Had a goal at Ohio State on 10/18, setting a new career high for goals in a season ... Scored a power-play goal, his first goal since his sophomore year, and added an assist against Alabama Huntsville on 10/12

CAREER
2018-19: Collected 12 assists while appearing in all 36 games for the Mavericks as a junior ... Finished the season second in points amongst all UNO defensemen ... Named to the NCHC Academic All-Conference Team ... Notched two assists against Denver on 3/02 ... Assisted on both Omaha goals at Minnesota Duluth on 1/25 ... Had his first point of the season with an assist at Union 10/13

2017-18: Posted career-highs in assists (12) and points (13) on his way to finishing second among Omaha blueliners in scoring ... Earned NCHC Defenseman of the Week honors, his first, for the week of 1/01 for his play against Union and was an NCHC Academic All-Conference Team selection ... Tallied two-assist efforts against Western Michigan on 1/26, Union on 12/30 and St. Cloud State on 12/01 ... Netted his first career game-winning goal – and first goal since his collegiate debut (Oct. 14, 2016) – against Union on 12/29

2016-17: Recorded six points (1+5) in 35 games during his rookie season at Omaha ... Picked up his first multi-point game with a pair of assists against Colorado College on 11/05 ... Lone goal of the season came in his collegiate debut against Alaska-Anchorage on 10/14, which was also UNO’s first goal of the season ... Named to the NCHC Academic All-Conference Team

2015-16: Had 30 points on three goals and 27 assists in 60 games for the Lincoln Stars of the United States Hockey League ... Paced all Stars defensemen and ranked fifth overall in team scoring while also adding 112 PIM ... Tied for 12th among all USHL blueliners in points while his 27 assists tied for eighth-most ... Totaled 11 points on the power-play, including nine assists, and posted seven multi-point outings ... Notched one assist in four playoff contests

2013-14: Appeared in one game for the Minnesota Wilderness of the North American Hockey League