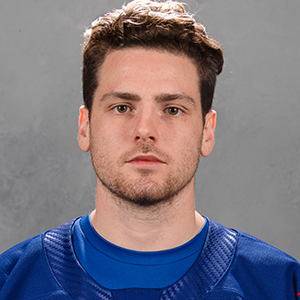 2021-22: Made his NHL debut during a four-game stint with the Florida Panthers (NHL) ... Finished second among all Charlotte Checkers (AHL) defensemen with 23 assists and third in points (31) ... Overall ranked fifth in assists and 10th in points ... Logged one assist in seven Calder Cup Playoff contests with the Checkers, which included his professional playoff debut on 5/10 versus Bridgeport ... Produced a season-high four points on one goal and three assists versus Rochester on 12/14 ... After making his NHL debut versus Washington on 11/04, he posted a plus-four on-ice rating on 1/25 at Winnipeg

2020-21: Potted seven points on three goals and four assists in 15 games with the Syracuse Crunch (AHL), which served as the temporary affiliate of the Panthers ... Three of his four helpers came against the Amerks

2019-20: Combined for 35 points on eight goals and 27 assists in 57 games between the Checkers and Springfield Thunderbirds (AHL) before the COVID-19 Pandemic ... Finished fourth among all AHL rookies in points and tied fourth in assists ... Scored his first professional goal to go with three assists for his multi-point effort on 10/19 versus Syracuse

2018-19: Completed a four-year collegiate at Quinnipiac University (ECAC), amassing 39 goals and 77 assists for 116 points in 154 games ... Was second in program history among defensemen with 116 points and third with 77 assists at the time of graduation ... Set the program record for most points (17+22) by a defenseman in 36 games during his final season with the Bobcats ... Led Quinnipiac with 17 goals and was second on the team with 39 points ... Served as Team captain for the second straight season ... Finalist for Hobey Baker and ECAC Hockey Best Defensive Defenseman Awards ... Honored as ECAC Hockey First and All-Academic Teams

2016-17: Led all Bobcats with 15 power-play assists and 20 power-play points in 38 games while his 19 helpers and 26 points were second and third-most overall, respectively ... Named to the ECAC Hockey All-Academic and Third Teams

2015-16: Paced all ECAC Hockey freshman with 22 assists and was third in the conference with 26 points while playing in 43 games during his first campaign at Quinnipiac University ... His 22 assists and 26 points were the second most by a freshman in program history ... Nabbed honored by the ECAC Hockey Rookie of the Week twice (3/15) and (10/27) ... Named to ECAC Hockey All-Rookie and All-Academic Teams

2014-15: In a career-high 57 games with the Salmon Arm Silverbacks (BCHL), posted six goals and 14 assists for 20 points, which ranked fourth most on the team amongst defensemen

2013-14: Produced one assist in three games with the USHL’s Fargo Force