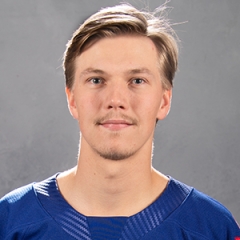 LAST SEASON
2019-20: Completed his third season with his hometown Ilves Tampere of the SM-liiga in Finland, scoring two goals and adding 10 assists while playing in 46 games for the second straight year... Scored one goal on the power-play ... Finished fifth among team defensemen in scoring ... Ranked fifth in assists (35) and is tied for 18th in in total points among all-time SM-liiga defensemen before their age 21 seasons ... Tallied two assists vs. Jukurit on 10/12 ... Collected a game-high eight shots against Ässät on 9/21 ... Had a goal and an assist against Lukko on 9/14

CAREER
2018-19: Led all Tampere defensemen and finished seventh overall on the team in scoring while establishing career-highs in goals (3), assists (21) and points (24) and appearing in 46 games ... Paced Ilves blueliners and tied for second among all skaters with 21 assists ... Tied for 15th among all SM-liiga defensemen in points ... Two of his three goals came on the power-play ... Recorded five multi-point outings and totaled 173 shots during the regular season ... Added one assist in four playoff contests ... Posted a three-game assist streak (0+3) from 10/17 to 10/23 ... Had a three-game point streak (1+3) to close out the month of September

2017-18: Recorded four assists and 43 shots in 21 games during his rookie season with Ilves ... Notched his first pro point with an assist in his professional debut against HPK on 9/01

INTERNATIONAL: Won a gold medal with Finland at the 2019 IIHF World Junior Championship, which he won alongside fellow Sabres prospect Ukko-Pekka Luukkonen ... He recorded two points (1+1) and a plus-5 rating in seven tournament games