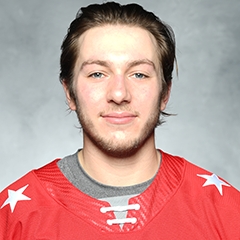 LAST SEASON
2019-20: During his final season with the St. Mary’s Huskies (AUS), led all AUS defensemen in both assists (33) and points (38) while appearing in 29 games ... Added five points (2+3) in seven playoff games ... Named a First All-Star Team selection for the second consecutive year and named to the All-Canadian First Team

CAREER
2018-19: Totaled six goals, 23 assists for 29 points in 29 games in first season with the Huskies ... Tallied three assists in five postseason contests ... Finished second and third among all St. Mary University skaters in both assists and points, respectively ... Ranked fourth among all defensemen in the league in both assists and points ... Named to the AUS All-Rookie and First All-Star Teams ... Also earned a spot on the All-Canadian Second Team

2017-18: Matched a career-high by appearing in 68 games during his only season with the Moncton Wildcats to close out his junior career in the Quebec Major Junior Hockey League ... Served as team captain ... Contributed three goals, nine assists for 12 points in 12 postseason games with the Wildcats ... Over the final nine playoff contests, posted 11 points (3+8) ... Finished the regular season by recording a two-assist game in five of the last six games ... Had 19 multi-point efforts including two to open the campaign

2015-16: Had eight goals, then a career-high 31 assists and 39 points in 68 games during his third season with Shawinigan ... Ranked second amongst all Cataractes blueliners in points while finishing third in assists ... Turned in three three-point performances on the slate which included his first three-assist outing on 10/25 against Victoriaville ... Booked a six-game point streak from 10/09 to 10/25 when he added one goal and eight assists over that span

2014-15: In second season with Cataractes, recorded two goals, 14 assists and 16 points in 66 appearances while also adding four points (1+3) in seven playoff games ... Opened the campaign with a goal and an assist at Chicoutimi on 9/12 for his first career multi-point effort

2013-14: Chipped in 16 points (4+12) in 60 games during first season with Shawinigan and one assist in four postseason contests ... Finished the slate tied for third among all Cataractes defensemen in goals and third in both assists and points ... Posted five points (1+4) over final five regular season outings ... Made QMJHL playoff debut on 3/21 at Baie Comeau and recorded his first post season point on an assist on 3/26 versus the Drakkar ... Scored his first career junior goal on 10/27 against Drummondville ... Was credited for first point on 9/15 versus Chicoutimi after beginning career on 9/13 at Victoriaville