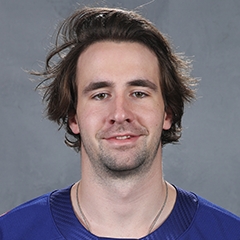 LAST SEASON
2019-20: Completed a two-year collegiate career at Western Michigan University (NCHC), amassing 26 points (7+19) in 65 games ... Finished his second season with two goals and 12 assists for 14 points in 30 games with the Broncos while serving as an alternate captain despite being the youngest player on the team ... Named to the NCHC Honorable Mention All-Star Team and was a finalist for the NCHC’s Best Defensive Defenseman

CAREER
2018-19: Appeared in 35 games during his first season with the Broncos, totaling five goals and seven assists for 12 points ... Registered his first-collegiate assist on 11/02 at Denver ... Began a season-long five-game point streak (3+2) with his first-career goal on 10/23 against Bowling Green ... Was named to the NCHC Academic All-Conference Team

2017-18: Skated in 23 contests with the U.S. National Team Development Program U-18 Team, collecting 14 points on four goals and 10 assists ... Had a season-long four-game point streak from 3/03 to 3/15, tallying six points (2+4) over that span ... Opened the campaign with a goal and three assists in his first three games of the season

INTERNATIONAL: Represented the United States at each of the last three IIHF World Junior Championships, most recently serving as captain of Team USA at the 2020 event that was held in Czech Republic ... Led the Americans to back-to-back silver medals at the 2019 World Junior Championship in Canada and in 2018 with the U.S. National U-18 team in Russia, where he recorded two points (1+1) in six international contests