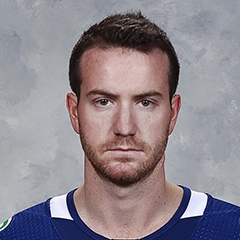 LAST SEASON
2019-20: During final season with the Utica Comets (AHL), finished tied for second among all defensemen with four goals, and fifth in both assists (5) and points (9) in 35 games before the cancellation of the season ... Began the season with three points (2+1) in his first three games while also posting plus-7 on-ice rating over that span

CAREER
2018-19: Tied for eighth among all Comet blueliners with seven assists and eight points in 43 games in his first full season with Utica ... Ended the year first on the team with a plus/minus on-ice rating plus-12, which matched a personal best and established a career-best

2017-18: Split the season between Utica and the Jacksonville Icemen (ECHL) ... Earned a PTO contract with the Comets in January after notching a goal and six assists in 21 games with the Icemen ... Finished the season fourth among all Utica defensemen with four goals in 45 games while tying for fourth in assists (12) ...  Ranked fifth amongst the club’s blueliners with 16 points ... Appeared in five Calder Cup Playoff games, recording two assists ... Had at least one shot in all but two games with Jacksonville including a season-high five at Greenville on 11/04 ... Had his first and only multi-point effort while in the ECHL as he tallied a goal and an assist on 11/28 versus Orlando

2015-16: Skated in 61 games with Syracuse, tallying a pro career-high six goals, which tied for second amongst the club’s defensemen ... Registered a season-best eight shots on goal versus St. John’s ... Collected a season and then pro high three points on a goal and two assists on 12/18 against Binghamton

2014-15: In a pro career-high 67 games with the Crunch during his rookie season, posting four goals, 18 assists totaling 22 points while also skating in three Calder Cup Playoff contests ... Had one shot in his pro playoff debut at Wilkes-Barre/Scranton on 4/24 ... Booked a pair of two-assist games in back-to-back appearances on 3/21 versus Utica and 3/22 at Springfield ... Tallied his first pro goal at Hartford on 1/09 ... After making his pro debut against Springfield on 10/11, credited with his first pro versus Springfield on 10/17 ... Named Most Improved player during the campaign

2013-14: In his final season with the North Bay/Brampton Battalion (OHL), finished the campaign tied for third on the team in assists (26), second among defensemen in points (30) and third in goals (4) in 55 games ... Helped the Battalion reach the OHL Finals, registering a career-high four goals, six assists for 10 points in 22 post-season games ... In four years in the Ontario Hockey League, amassed 119 points on 17 goals and 102 assists in 256 contests

2011-12: Led all Brampton defensemen in goals (7), assists (27) and points (34) in 66 contests ... Finished second among all Battalions in assists while ranking fourth on the club in points ... Appeared in eight postseason tilts, notching five points (1+4) ... After netting a pair of his first playoff points on two assists on 3/25 versus Sudbury, scored a goal and plotted two more helpers to complete a three-point night against Sudbury on 3/27 ... Collected seven points (1+6) over a four-game stretch from 12/29 to 1/06 which featured three different two-point efforts