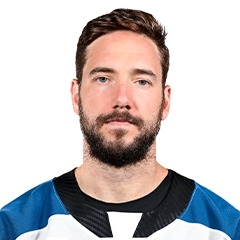 CAREER
2018-19: Notched eight points (2+6) in 48 contests to go with a team-high 111 PIM during his second season with the Amerks ... Appeared in all three of Rochester’s postseason games against Toronto … Made his Amerks postseason debut in Game 1 of the North Division Semifinals vs. the Marlies on 4/19 … Notched an assist for the second straight game against Binghamton on 2/17 … Appeared in his 300th AHL game at Wilkes-Barre/Scranton on 1/18 … Assessed a one-game suspension as a result of his actions against Providence on 12/07 … Racked up a team-high 17 PIM at Springfield on 11/16 … Scored his first goal of the season at Hershey on 11/03 … Earned the primary assist on the game-winning goal against Laval on 10/27 … Made his season debut at Bridgeport on 10/14

2013-14: Split his second professional season with the Crunch and the Springfield Falcons (AHL) … In 19 games with Falcons, totaled two goals and one assist … Made his Syracuse debut on 3/07 vs. Rochester … Traded from the Columbus Blue Jackets (NHL) to the Tampa Bay Lightning (NHL) on 3/05 … Skated in 50 games with the Falcons, tallying four markers, five helpers and 128 PIM … Had an assist in back-to-back games on 10/13 and 10/18

2012-13: Skated in a career-high 67 games with the Falcons… Completed rookie campaign with nine points (3+9) and 128 PIM … Made his pro playoff debut, appearing in one game for Springfield … Recorded first assist on 11/02 against Hershey …Made professional debut on 10/13 and scored his first-career goal that same night vs. St. John’s

PERSONAL: Son of former NHL forward Derrick Smith, who played most of his 15-year pro career with the Philadelphia Flyers ... Also had stints with the Minnesota North Stars and Dallas Stars before closing out his career with the Kalamazoo Wings of the IHL